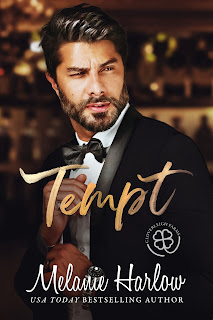 Note: An advance reader copy (ARC) was provided by the author.
Tempt is the fourth AND final book in the Cloverleigh Farms: Next Generation series, and I'm feeling all bittersweet about it. I know all good things have to come to an end, and maybe I was a wee bit overly hopeful everyone in this generation of Cloverleigh Farms would get a book; alas, 'twas not meant to be. Still, Melanie Harlow does not disappoint with the story of thirty-two-year-old Millie Rose MacAllister, the oldest daughter of Mac MacAllister (Irresistible, book one of the Cloverleigh Farms series) and stepdaughter to Frannie MacAllister née Sawyer. When forty-seven-year-old Zachary Barrett rescues her from a jerk hitting on her at a Manhattan bar, she knew it was to be nothing more than a hook-up, neither of them making promises or asking for more time together. Then a week later, their paths cross again in Michigan--at the rehearsal dinner of her ex-boyfriend who just happens to be the son Zach didn't know about until recently. Getting involved would lead to complications neither Millie nor Zach can afford, but the temptation is too much to resist. But Millie dreams of having a family of her own and a home to share with her husband and children--dreams Zach doesn't share. He's a decade and a half older, never wanted kids, and lives thousands of miles away in California. Can there be a happy ending for the wedding planner and the security specialist?
Can I just say that I think Melanie Harlow saved the best MacAllister sister for last? (Sorry, Winnie and Felicity!) Millie was simply awesome, someone who had confidence in herself, embracing who she was and making a go at her dreams, both personally and professionally. Yes, she's a plus-sized heroine (YAY!), yet there wasn't any of the usual insecurities and hyper focus on her size and shape, which is something that I've often found in other romances with female main characters like her. I loved how she was with her family, and that she knew her worth and what she deserved. As for Zach, I swear, there were moments where I was sorely tempted to do bodily harm to the guy! Argh! He was someone who had highly likable qualities, and it was clear that the best version of himself was when he was with Millie. But goodness, he was stubborn as heck!  Of course, he had his reasons and they were justified, and naturally, he needed to figure things out on his own. Aside from the MacAllister fam bam, there may be some familiar names that will bring a smile to the faces of readers of a particular author friend of Harlow's. Wink, wink. All in all, Tempt served as a fitting end to this spin-off series, which is why I'm giving it five stars. Dare I hope we return to Cloverleigh Farms in the future?
-------------------------
Read my reviews for the Cloverleigh Farms: Next Generation series: