Review: Princess and the Player by Ilsa Madden-Mills (Strangers in Love #2) 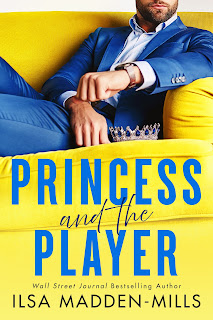 Note: An advance reader copy (ARC) was provided by Montlake.

My childhood has trapped me for years, creating a hollow man who didn't know how to let others in.

Then a princess came along, tore down my defenses, and stole my heart.

Princess and the Player is the second novel in Ilsa Madden-Mills' Strangers in Love series, and if you've read the series starter, Beauty and the Baller, then it would be near impossible for you not to remember Tuck Avery. That being said, this new release is an absolute standalone, with a mention here and there of Ronan Smith, Tuck's best friend, retired professional football player, and the male main character of the aforementioned first book in the series. Tuck is now thirty-six and feels every bit of those years, but rather than stay home and "celebrate" his birthday the way he wants to, a couple of his teammates decide to surprise him with a night out at an exclusive club known for its masquerades. There he meets a princess bride, although she was neither an actual royal nor promised to anyone...at least not anymore. They share one intense night, and go their separate ways, never to see each other again. But Fate has other plans for the player and his princess, who turns out to be thirty-year-old artist Francesca Lane, because not only do they keep bumping into each other, but they both live in the same building! The thing is, Tuck doesn't believe in fate, forever, or having a family. So, what happens when Francesca finds out that their one night together has resulted in her being very pregnant?
Okay, let me start this off by saying that my impression of Tuck in Ronan's book was different from the Tuck I was re-introduced to here, and you know what, I'm not complaining. Yes, it took me several chapters to form an attachment to him, but once I did, I was caught--hook, line, and sinker--and my heart just felt for him when I learned his back story. The same can be said for Francesca, and goodness me, but how strong she was, especially after everything she had been through. I loved her strength and independence, yet she also knew she had such an awesome support system in her best friends, Cece and Brogan, Herman (Wickham's doorman), the Russo sisters, and of course, Mr. Darden, whenever she needed them. Speaking of being there, I'd be remiss if I didn't mention Jasper, Tuck's quarterback and self-appointed bestie. (Would it be too much for me to hope that Jasper gets his own book? Maybe Brogan, too? Please? Maybe?) In short, this book had a fantastic and notable cast of characters, and yes, including Courtney, Widow Carnes, and Francesca's exes because they all added to the overall story.
I make no secret of how much of an angst addict I am, and there was quite a bit of it here, given the respective childhoods of the main characters and how much of an impact it made on them. Now, that doesn't mean that the author gives us an angst fest. If there's anything I've learned reading Ilsa Madden-Mills' books, it's that she strikes that delicate balance when it comes to the different elements in her stories. Yes, there's angst, but there's also a healthy dose of wit and humor, and naturally, we can't forget the romance. I enjoyed seeing Tuck and Francesca fall in love as a couple while also figuring out what exactly it was they wanted for themselves going forward. Theirs wasn't a case of love at first sight, which is what made their journey towards their happily-ever-after such an intriguing one, especially considering the issues they had to contend with as individuals. By the end of Princess and the Player, I was beyond emotionally invested, and that epilogue? Gah! I may have shed a happy tear or two. I am super satisfied. Five-plus-stars.
------------------------------
Read my reviews for the Strangers in Love series: