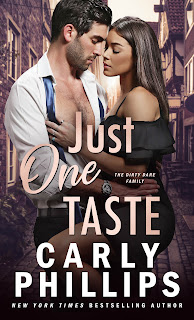 Note: An advance reader copy (ARC) was provided by the author via Wildfire Marketing.
Just One Taste is the third book in the Dirty Dares series, a spin-off of Carly Phillips's The Kingston Family series. Here we've got a falling-for-my-best-friend's-sibling and age-gap romance featuring thirty-three-year-old Asher Dare, CEO of Dirty Dare Spirits, and twenty-one-year-old Nicolette Bettencourt, supermodel and younger sister of one of Asher's closest friends, Derek Bettencourt. When Nikki finds herself in a media firestorm thanks to illegally obtained and released nude photos of her in the privacy of her home, her brother reaches out to Asher and asks him to take her to Asher's private island until everything blows over. Asher doesn't expect to be as drawn to Nikki as he is, and being stuck on an island doesn't make keeping his distance any easier. Not only is she Derek's sister, but the twelve-year age difference between them is no small matter. Whatever he once thought of her turns out to be nothing more than wrong first impressions, because the Nikki with him on the island--the one he's falling for--turns out to be much more.
After the cliffhanger in the previous book, Just One Kiss, that was meant to pique readers' curiosity, I was eager to see how everything would play out between Asher and Nikki. He truly was the grump to her sunshine, and I enjoyed seeing her break through all the barb and entice the softer, more protective side of him. The whole forced proximity aspect of the story was exactly what these two needed, but of course, it's not like they could live there forever, and the challenge that awaited them in the "real world" was the test they needed. Figuring out who was behind Nikki's nude photos wasn't that difficult, especially since I guessed right from the moment they were mentioned. The romance itself, though, as well as certain family issues were the best parts of this book. I'm also looking forward to reading a couple of future books featuring some of the supporting characters here. Just One Taste was a 4.5-starred addition to the Dirty Dares series.
-------------------------
Read my reviews for the Dirty Dares series: