Review: Someone to Hold by Marie Force (Wild Widows #2) 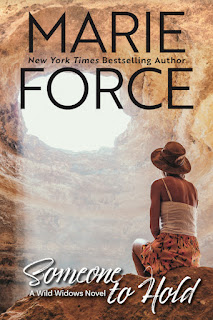 Note: An advance reader copy (ARC) was provided by the author via Wildfire Marketing.
Marie Force set the bar incredibly high with the first book in her Wild Widows series, Someone Like You. Well, Iris (whose last name escapes me!) and Gage Collier took the challenge and ran with it, because their story is a reminder that while beginning a new chapter in your life may be daunting, it can also be the most rewarding. Someone to Hold is their book, and we have Iris, one of the original founders of the Wild Widows support group and a widow with three children whose husband died in a plane crash, and Gage, a widower who lost his wife and two daughters when they were killed by a drunk driver, finally acting on the connection they've shared. It's been less than three years since Iris lost the man she loved, but being with Gage feels right. Their friendship means the world, yet something tells Iris they're meant for something more. The thing is, while Gage may be willing to share his body with her, will the time ever come when he can open his heart once again to someone--to Iris? She's ready to fall again, but will he be there to catch her?
There's no denying that widowhood and grief are heavy topics, so going into the books in this series, I was aware that these weren't laugh-out-loud romantic comedies. Experience has shown me that Marie Force isn't an author who skims over difficult subject matter, so why would I expect less? My emotions were high reading Iris and Gage's book. These two clearly know what loss is like, but goodness, they deserved another shot at finding--and keeping!--love. I adored that these two were such good friends prior to them hooking up and then falling in love. Now, neither Iris nor Gage were perfect; they were falliable, and that's part of why I was as emotionally invested as I was. I wanted to see them evolve and be the best versions of themselves as individuals in hopes of bringing those to the table when they decided what they had was worth the fight and any potential complication and heartache. These two were tested time and again, and yes, sometimes they faltered, but at the end of the day, they righted themselves and continued writing their second chapter--together. Someone to Hold was one satisfying and beautiful romance. Five stars!
Date Read: 14 November 2022
Learn more about Marie Force.
Purchase Someone to Hold on Amazon | Apple Books | B&N | Kobo.