Review: Nobody Cares Unless You're Pretty by Lani Lynn Vale (Gator Bait MC #1) 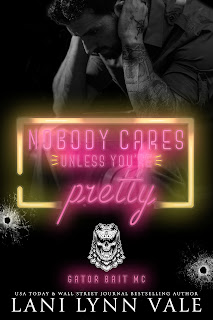 Note: An advance reader copy (ARC) was provided by the author via Uplifting Author Services.
Lani Lynn Vale's got a new series, and it's gotten off to a rather excellent start! Nobody Cares Unless You're Pretty is the first novel, and if you were able to read Vale's prior release, Never Trust the Living (Battle Crows MC #7), then the location of the series and several characters should be easily recognizable. That doesn't mean, though, that you need to read the aforementioned series ender in order to fully appreciate this latest Vale novel. It's completely separate from anything and everything to do with the Battle Crows MC series, so if you're new to the author or have only read some of her books but not the previous series, totally no worries!
Dutch Panchek is dedicated to her work as a licensed therapist. Even after her office fell victim to a bombing, she wanted to continue to be there for her patients, going as far as purchasing an RV as her temporary place of business. She's willing to do anything for those under her care...even murder someone who harmed them. But she needs to make sure nothing can be traced back to her, which is why she decides to reach out to Wake Westfield. He was sent to be prison a convicted murderer, yet he was hailed a hero by everyone in Accident, Florida, save for a corrupt few. He tells her exactly what she has to do, and Dutch follows everything to a T. Now, Wake's out on parole, and with Dutch living in the same town, these two re-crossing paths is inevitable.
I had a lot of fun reading this series starter! I've been curious about Wake ever since he was introduced in Never Trust the Living, and I love that he was paired with Dutch, who was quite a memorable supporting character in the aforementioned novel as well. There was clearly a fair bit of chemistry happening between them when they first met, and when they finally have the opportunity to explore it, talk about one heck of an explosive connection! As can be expected, everything romance-wise happens pretty quickly with Wake and Dutch, but there's still a good amount of tension when it comes to the suspense part. Of course, each of the supporting characters brought their own bit of personality, which is why I'm looking forward to reading the rest of the Gator Bait MC series. Nobody Cares Unless You're Pretty was a five-starred beginning to the series.
Date Read: 25 October 2022
Learn more about Lani Lynn Vale.
Purchase Nobody Cares Unless You're Pretty on Amazon | Apple Books | B&N | Kobo.