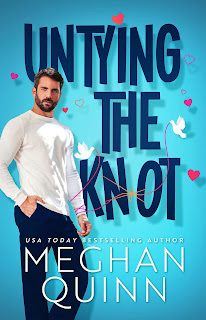 Note: An advance reader copy (ARC) was provided by the author.
Untying the Knot is a standalone spin-off of Meghan Quinn's previous release, Not So Meant to Be, and features a character introduced in The Perfect Catch, which is part of her Brentwood Boys series. If you're a longtime reader of Quinn's, then you'll remember Ryot Bisley, third baseman for the Chicago Bobcats, aka the Bobbies. He shares his story with his wife, Myla. Now, you're probably thinking, hey, they already got their happily-ever-after! Well, haven't you ever wondered what happens after the HEA? In the case of Ryot and Myla, we see them as they are today, with their marriage on the brink of collapse, while also getting glimpses of their past through flashbacks. Nothing needs to be read prior to this new book in order to fully understand everything that is going on, but if romantic comedies are your thing, Quinn's Brentwood Boys and A Not So Meet Cute and Not So Meant to Be are highly recommended reads, so make sure to check them out later!
No marriage is perfect, and while Ryot Bisley knows his has its fair share of issues, the last thing he expects is for his wife to hand him divorce papers. Sure, they have problems, but was being married to him such a terrible thing that Myla now wants to cut all ties? They may not have the most stellar of starts, but he won her over and she's the only woman to lay claim to his heart. She was there for him as his career transitioned from the minors to the majors, she being a huge part of the success he achieved. But now that he's retired, Ryot is busy figuring out who he is away from playing baseball. With Myla wanting to end things, maybe it's time for him to show her that he doesn't only play to win, when it comes to the woman he loves, he will always want to play for keeps forever.
When I read the blurb for this book, I had a feeling it was going to be a romance with more angst than usual from Meghan Quinn. It was interesting to see Ryot and Myla as they are and as they were. I appreciate authors who try to offer up something different for their readers, and Quinn did exactly that with this standalone. Yes, these two got together over a decade ago, choosing to commit themselves to each other, but wanting and needing to stay together takes more work, especially when time and circumstances have what used to be a connection that was tied tight begin to slowly unravel. Ryot refuses to lose Myla, but what is it going to take to prove to her that they are meant to be? Well, I'm certainly not going to say what it took for them to figure things out, but suffice it to say, it was a happy ending that was fought for. I'm handing Untying the Knot four stars.
Release Date: 15 November 2022
Date Read: 13 November 2022
Learn more about Meghan Quinn.
Pre-order Untying the Knot on Amazon.