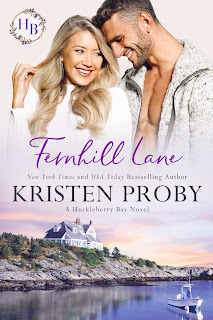 Note: An advance reader copy (ARC) was provided by the author via Valentine PR.
Kristen Proby takes readers back to the quaint town of Huckleberry Bay with the second novel in her series by the same name. Fernhill Lane is a second-chance romance featuring Sarah Pedersen and Tanner Hilleman, high school sweethearts who went their separate ways when she was eighteen and he was nineteen, only to end up with her renting his guesthouse after months of being back in their hometown. They may have once been young and in love, but he broke her heart when he ended things to go back to college, and she went on to marry a much older man about a year or so afterwards. But Sarah's marriage wasn't meant to be her happily-ever-after, not with a husband like the one she spent over a decade with. Being back home in Huckleberry Bay has allowed her to spread her once clipped wings. Could this also be an opportunity for Sarah and Tanner to rekindle what was snuffed out a dozen years ago, and hopefully, they'll get things right this time around? What happens when Sarah's past suddenly decides to disrupt her future happily-ever-after?
As always, this author doesn't disappoint. Kristen Proby knows how to write romance, and she does it with her own personal touch, making her characters the kind you feel like you could be friends with in real life and making the whole getting-to-you-know aspect one that almost always ensures you'll become emotionally attached to them. I loved Sarah and Tanner together, and I was glad that there wasn't this whole hullabaloo when it came to their respective pasts with other people. They mature individuals who didn't take their second chance at love for granted. They also had a great support system around them, courtesy of their close-knit circle of friends, and it was great "catching up" with Luna and Wolfe while also getting all excited for the couple that comes next. Another thing I appreciated was the reminder that happy endings don't always require reconciliations with family members who treated you terribly but making the effort with those who were worth it. Overall, Fernhill Lane left me feeling happily satisfied, and it easily earns four stars.
Release Date: 15 November 2022
Date Read: 13 November 2022
Learn more about Kristen Proby.
Pre-order Fernhill Lane on Amazon | Apple Books | B&N | Kobo.