The Copper Valley Thrusters Series
The Pilot and the Puck-Up
Royally Pucked
Beauty and the Beefcake
Charming as Puck
I Pucking Love You
by Pippa Grant
Cover Designs: Najla Qamber (Qamber Designs & Media)

About the Copper Valley Thrusters series 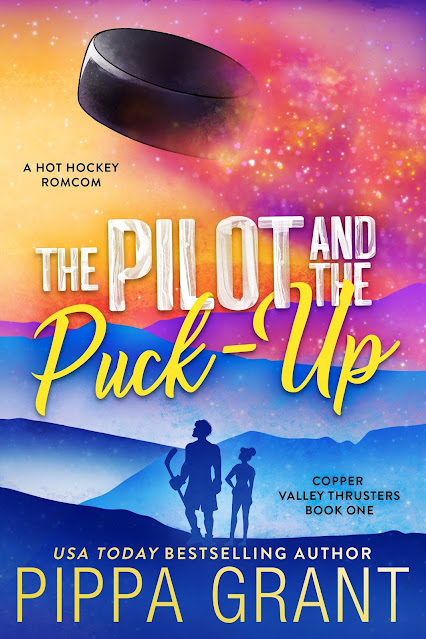 The Pilot & and the Puck-Up (book one)
He’s the biggest, baddest, most spider-fearing motherpucker on the ice…
Zeus Berger is an over-muscled, egotistical, sportsing goofball with a bigger mouth than shoe size—which is saying something—and I cannot get him out of my head.
He should be easy to forget. He’s all talk and no follow-through. But after an incredibly awkward one-night-stand gone wrong, I can’t shake him, and I don’t know if I want to.
I need to get my brain back on business, and fast. It’s hard enough being one of the toughest pilots in the flight adventure industry without the distraction of his body, his humor, and the teddy bear heart I’m starting to suspect he hides under all that bluster.
But when I realize he’s besties with the billionaire I’m trying to woo into investing in my business, I realize it can’t hurt to play nice.
Can it?
The Pilot and the Puck-Up is a standalone romantic comedy featuring an athlete whose ego won't fit inside a hockey arena, the most badass woman to ever fly a plane, rubber chockey (don't ask), and no cheating or cliffhangers. 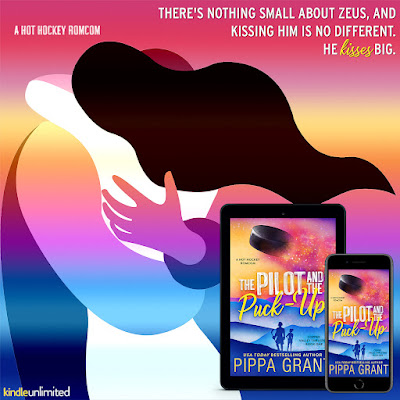 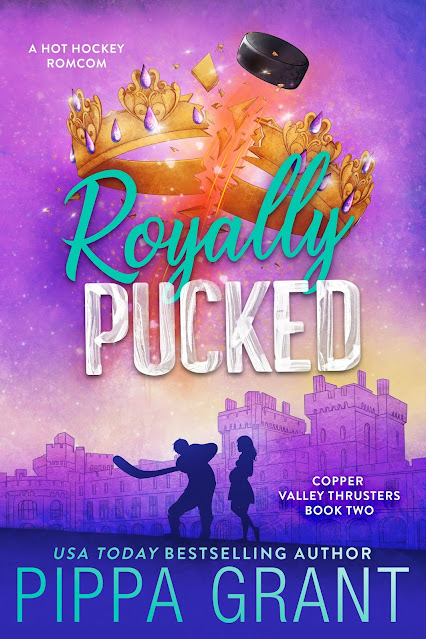 Royally Pucked (book two)
A hockey-playing prince, a most improper lady, and one accidental pregnancy…
When you’re an heir so spare that you’re more likely to be struck by lightning than to ever wear a crown, you’re allowed certain liberties.
But after taking those liberties with the wrong lady, I’ve been banished to America for a year. The world thinks it’s so I can indulge in my favorite pastime on a professional hockey rink, but really, I’m here while my father cleans up my latest mess.
My orders are clear: be an ambassador for my country, make the family proud, and stay far, far away from women.
No one ever said they had to stay away from me though.
Which is exactly how Gracie Diamonte, the world’s greatest baker, most adorable dinosaur-suit wearer, and the very model of kind innocence, sneaks past my defenses.
And my guard.
And how we end up facing a very unexpected pregnancy.
Of course I’ll do the right thing by her. All the right things.
Just as soon as I solve that pesky problem of my other royal duties.
Royally Pucked is a hilariously wrong romance between a spare heir and the lady least likely to ever wear a princess crown, complete with dirty cookies, an emotional support monkey, and lots of pucking around. This romantic comedy stands alone with no cheating or cliffhangers and ends happily with a family of…more than two. 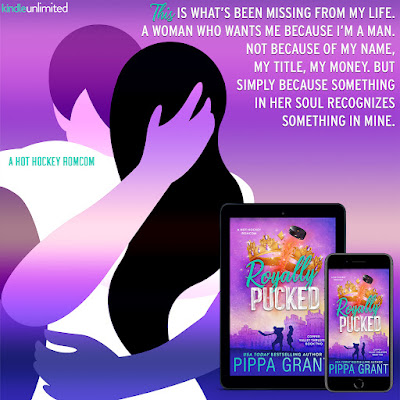 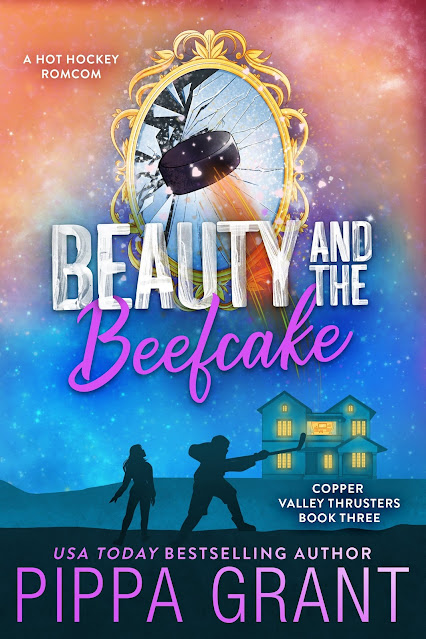 Beauty and the Beefcake (book three)
Ares Berger is completely, totally, and in all other ways off-limits.
He’s my brother’s teammate. He speaks even less than his pet monkey. (Yes, I mean monkey. That’s not a euphemism.) He’s stubborn, injured, silent, broody, and unfortunately, my new roommate.
Yes, yes, it’s lovely to have another person in the house when my ex-boyfriend starts making threats. And fine, the monkey is amusing. But my real problem with having Ares Berger living right down the hall?
He’s intriguing. And undeniably attractive. And the more time we spend together, the more I realize this silent giant has more to say than anyone gives him credit for.
And his sense of humor?
Someone catch me.
I’m falling.
I’m falling hard.
But how can I convince a man who’s never truly been seen that I’m the one who wants to not only know him, but also love him?
Beauty and the Beefcake is a vegan-friendly standalone romantic comedy featuring an athlete whose vocabulary is the only thing smaller than a hockey puck, a book smart but aimless hockey lover, a dilapidated old house that may or may not be haunted, and no cheating or cliffhangers. 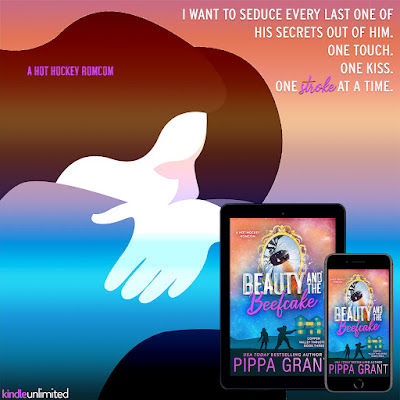 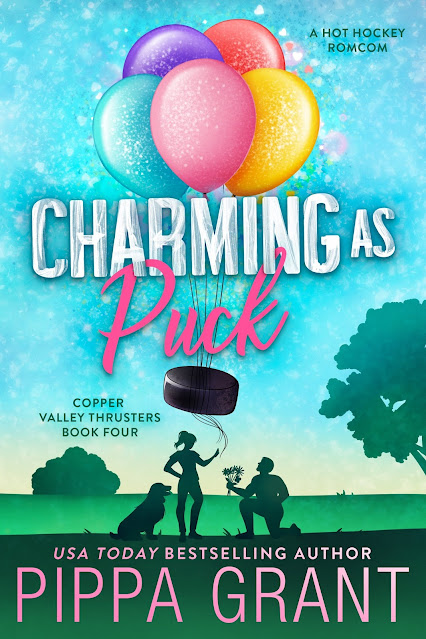 Charming as Puck (book four)
The man could charm the panties off a nun...
Nick Murphy. Hockey god. My best friend’s big brother. My friend-with-mindblowing-benefits. The best thing to happen to my nether regions since my subscription to the toy of the month club. The man I’ve been secretly in love with for years.
And total ass.
I am so done with him.
Except there’s one small problem.
Now that I’ve cut him off, his hockey game is in the toilet. He’s convinced I’m his good luck charm, and he wants me back. But only for his game.
I’ll be strong. I will. I’ll resist.
Asses don’t change their stripes.
Or do they?
This plan would be so easy if the man wasn't charming as puck...
Charming as Puck is a romping fun romance between a hockey player and his sister's best friend, complete with farm animals, epic birthday presents, and Berger Twin sightings. This romantic comedy stands alone with no cheating or cliffhangers and ends with a pucking awesome happily ever after. 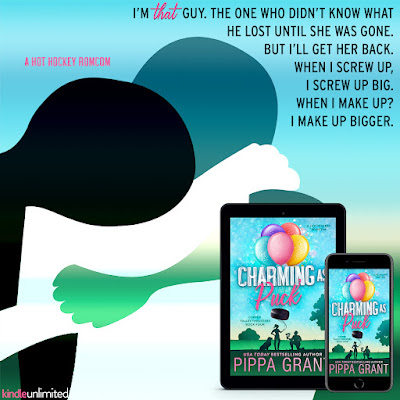 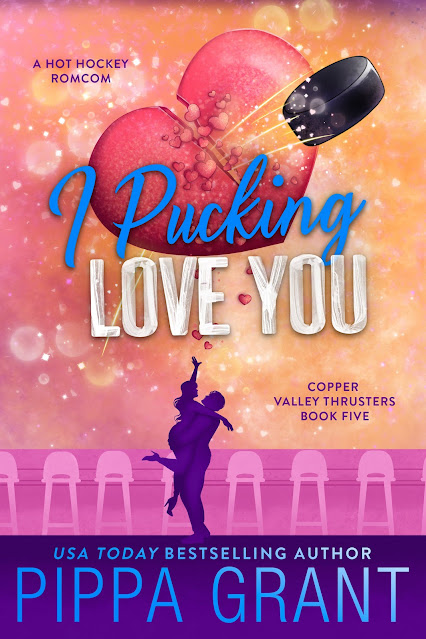 I Pucking Love You (book five)
You know those stories where an adorably misunderstood clumsy girl needs a fake date to a wedding so she asks her brother’s best friend and they accidentally fall in love?
I wish that was the kind of life I lead, but it’s not.
I don’t need a date to a wedding. I need a date to a funeral.
Clumsy sometimes fits, but then, that’s true for all of us, right? But adorable? No. Misunderstood? Nope again. I’m just your average girl, standing in front of a funeral invitation, asking it to be a winning lottery ticket instead.
And I don’t have a brother or a best friend with a brother available, which means I’m stuck with Tyler Jaeger.
Sure, he’s a professional hockey player who also knows advanced calculus, but let’s say we’re not compatible and leave it at that. I should know. I am a matchmaker.
Not a very good one, but that’s beside the point.
I know a mismatch when I see one.
Still, Tyler’s what I’ve got, and I am not going to this funeral solo, so he’s what I’ll take.
After all—what could go wrong at a funeral?
I Pucking Love You is a hilariously wrong romantic comedy about the world’s worst matchmaker, a hockey player with a problem he doesn’t want to talk about, and an awkward date-of-convenience that everyone would prefer to forget. It comes complete with a cat working his way through his nine lives, all the sexy times, fish and chips, and a swoony happily-ever-after. 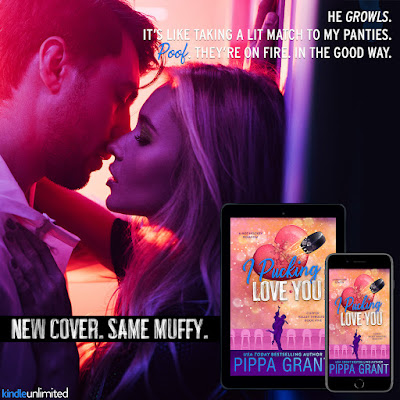 About Pippa Grant
Pippa Grant is a USA Today bestselling author who writes romantic comedies that will make tears run down your leg. When she's not reading, writing or sleeping, she's being crowned employee of the month as a stay-at-home mom and housewife trying to prepare her adorable demon spawn to be productive members of society, all the while fantasizing about long walks on the beach with hot chocolate chip cookies.
Connect with Pippa
Website | Facebook | Facebook Group | Twitter | Instagram | TikTok | Goodreads | BookBub | Verve | Amazon