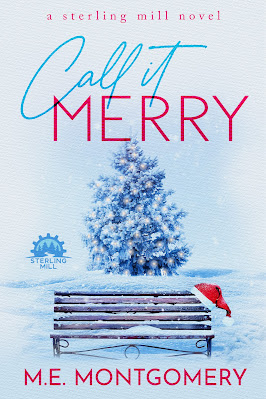 Call It Merry
(Sterling Mill #2.5)
by M.E. Montgomery
Date Released: November 3, 2022
About Call It Merry
The holidays are such a soul-sucking time. I don’t buy into all the commercialism of decorating a tree or Santa. But then I’m bamboozled into hanging lights, making ornaments, and baking fruitcakes—all things I hate—by a woman who’s haunted me since I met her months ago.
Now, Megan is determined to fix what she calls my Grinchy attitude about the holidays. We might not share the same feelings about Christmas, but I am more than happy to unwrap her behind closed doors. However, she’s determined to keep me on the “friends only” list when I would rather be on the "naughty list." The only problem is, the more I spend time with her, the more everything I believe is called into question.
Because the Grinch may have stolen Christmas, but Megan may have stolen my heart. 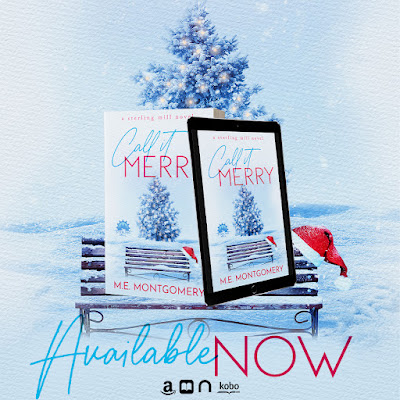 An Excerpt from Call It Merry
I was about to head upstairs for a shower when the doorbell rang. Grimacing, I debated on ignoring whoever it was, but the bell rang again. I glanced down, then shrugged. The sweatpants I pulled on to walk through the house were better than what I’d originally had on, which was nothing. Besides, it was probably Reid with my police report. Maybe it was a good thing they had woken me up early. I had to deal with calling the insurance company and arranging for a rental.
Milo barked and ran between me and the front door. “Shush,” I commanded, and he quieted but continued to prance in front of the door. I couldn’t help but be amused. He might be getting on in years, but the pup in him was still going strong.
The brisk air woke up the part of me the coffee hadn’t, but not enough to prevent me from blinking at the woman who stood there.
“Good morning!” she practically sang.
That solved that. Only an elf would be so chipper this early on a Saturday morning.
Megan’s bright blue eyes popped beneath the same white hat she wore last night. Dark blue jeans hugged long legs, and a red pea coat nipped in at her waist. Her nose and cheeks were tinted pink from the cold temps, but it did more for her than any makeup would.
She must have been equally interested in my appearance. Her eyes roamed freely over my more-than-casual appearance, pausing without shame on my bare midriff.
I deliberately scratched my stomach again. “See something you like?” I teased.
She sniffed. “Nothing worth getting me on Santa’s naughty list.”
I knew she lied. Despite her denial, a new pinkish hue highlighted her cheekbones, bringing out the blue in her eyes, which sparkled as prettily as the sun glinting off the frost on the grass behind her.
Callie strode into the room and began to rub against my ankles. I scooped her up, and for a brief moment, I thought Megan’s eyes darkened with disappointment as I cradled the cat, covering my chest. Megan wasn’t the first woman to appreciate my efforts at keeping in shape, but knowing how much I got to her almost made me want to purr along with Callie.
“Want to come in? I just woke up, thanks to these clowns.” I scratched Milo between the ears.
“I thought I’d take you to breakfast before we get to work.”
“Huh?”
“You don’t understand the concept of breakfast? Please don’t tell me you’re one of those people who grab a coffee and a bagel from a bakery and eat at your desk.”
I was, but I wasn’t going to admit it. “I know what breakfast is. I just don’t know what work you think I’m supposed to be doing, especially at this hour.”
She rolled her eyes and shook her head as she pushed past me into the entranceway. “We promised Em and Zach we’d help them get ready for the town festival next weekend.”
“Huh?” I knew I sounded like a broken record, but I couldn’t help it; that seemed to be my only available response to her ridiculous statements.
Her eyes narrowed, and I swore I saw a flicker of devilment in them before she continued in an innocent voice. “Last night? When they left for the hospital? We made a promise.” She knelt down to receive enthusiastic kisses from Milo, who then flopped over onto his back for tummy rubs, which my uninvited guest happily gave.
She glanced up at me. “I told you I’d be over in the morning. Maybe that bump on your head should be looked at again if you’ve already forgotten.” Her expression softened. “You did hear about the baby, right?”
Finally, a question I could answer. “Yeah. I talked to Zach last night. I’m really happy for them.”
“Mama Rae is going to pick Iain up from his friend’s house and take him over to meet his new sister this morning. Then this afternoon, we’re going to visit the new baby and bring Iain back from the hospital and pick out a Christmas tree with him, then bring it here. In the meantime, we’re going to get everything else ready and start tackling some of Em’s lists, as well as my own.”
I scratched my head. There wasn’t enough coffee in the pot for this kind of confusion.
“I’m sorry. We’re decorating their house for them?”
She rolled her eyes. “Yep. Keep up, Mr. Grinch.”
I scowled. It was true I didn’t get into all the decorating and extra festivities, but being called “Grinch” didn’t sit well with me, either, especially from her.
“I’m not grinchy. I just don’t—”
“Yeah, yeah. I know.” She stood as she talked, scowling at me. “You don’t believe in the magic of the holidays. But I also know you’d do anything for the Abbott clan.”
At least, she wasn’t wrong about that.
She took off her coat. “Now scoot. Time’s awastin’. Go get that shower, and I’ll treat you to the best breakfast outside of Em’s cooking. I’ll just help myself to coffee while you…you do something about that.” She waved a finger in a circle in front of my naked chest.
Seeing a woman take charge with such confidence, even if she was a pain in my ass this morning, was a turn-on. I didn’t want to spend my morning doing anything “festive”, but I found myself following her bidding, mostly because I didn’t want her to see just how much she turned me on. There was only so much the loose sweatpants I was wearing could hide. 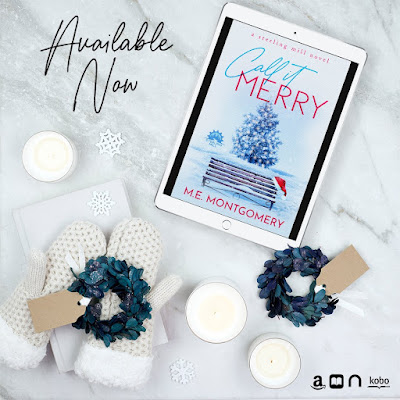 M.E. Montgomery has been an avid reader her entire life, and after falling in love with so many characters created by other authors, a new one began to form in her head. With the support of her family, she decided to write it.
She is the homework queen to her four school aged children who think she is a genius in math, science, history and spelling. Fortunately, her biology and elementary school teaching background help her to keep up the expert façade, at least for now.
Although born and raised in the Washington DC metro area, she has considered many places to be called home since she left to attend college in North Carolina. She is a proud Navy wife, setting up a home wherever the Navy sends her husband. When she’s not reading or writing, she loves to go camping with her family, drink wine on the deck, and be swept off to romantic getaways.
Connect with M.E. Montgomery
Website | Facebook | Instagram | Goodreads | BookBub