Review: Single and Ready to Jingle by Piper Rayne 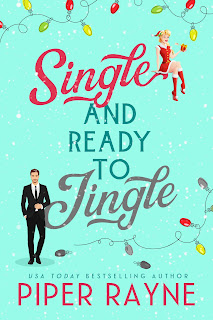 Note: An advance reader copy (ARC) was provided by the authors via Valentine PR.
With one series coming to a close and a new one launching next month, the writing duo of Piper Rayne have a brand-new standalone for readers and fans, and it's a holiday romantic comedy with a pinch of angst to it! Single and Ready to Jingle is the story of MacKenzie Montgomery and Andrew Wainwright. The two meet on a dating app that focuses on two people getting to know one another better through conversations rather than relying on physical appearance. Showing up still dressed as an elf, however, may not have left a positive first impression, but what's a girl running late while working as an event planner to do? While Andrew may be a gorgeous Brit and an ambitious lawyer, he wasn't exactly making any effort to charm Kenzie. Maybe it had to do with the realization that he's her brother's best friend, but that date was a disaster. It would never have worked out anyway, not with Kenzie loving Christmas as much as she does, and Andrew is not exactly a big fan of the holidays or anything to do with it. Then Andrew unexpectedly reaches out needing a "little" favor.
This was a read filled with merriment, but it also had some angst to it, courtesy of Kenzie's parents and Andrew's past with an ex. It took a bit of convincing, especially given Andrew's treatment of Kenzie during their first date, but lo and be-ho-ho-hold, the man managed to win me over, not with his charm but with his sincerity the more time these two were together. Is it weird, though, that I couldn't "hear" him as British in my head? Maybe that's just me, but I guess because there wasn't a whole lot in terms of Britishism (Briticism) on his end. That aside, I did like how much he developed as a main character, slowly opening up and delving into those parts of himself that were quite closed off. I think it took someone like Kenzie to make him realize that risking your heart for someone who's worth it requires not just love but trust and respect as well. There were also familiar names who popped up, which is a bonus for longtime Piper Rayne readers. All in all, Single and Ready to Jingle was a sweet, funny, and touching read that's perfect for the holidays. 4.5 stars!
Release Date: 15 November 2022
Date Read: 12 November 2022
Learn more about Piper Rayne.
Pre-order Single and Ready to Jingle on Amazon | Apple Books | B&N | Kobo