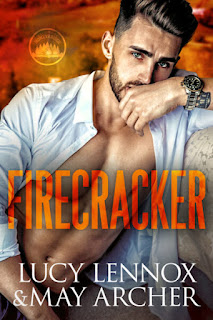 Note: An advance reader copy (ARC) was provided by the authors.
Lucy Lennox and May Archer's new series has gotten off to a (fire)cracking start! Firecracker is the first book in the Honeybridge series set in the fictional town of Honeybridge, Maine. The Honeycutts and the Wellbridges have a rivalry that has spanned generations, but Flynn Honeycutt and Jonathan Wellbridge share an entirely different kind of history. Both thirty-two, they've known each other their whole lives--childhood friends turned teenaged rivals. Three years ago, something happened that led to JT keeping his distance, choosing to focus on his career with Fortress Holdings in New York. Now, he's back in Honeybridge, and his promotion hangs on him getting the owner of Honeybridge Mead to say yes to a distribution deal with Forrest. With JT's reputation of getting the job done and charming the heck out of potential clients, this should be par for the course. The thing is, there's no charming this owner, not when it happens to be Flynn. JT is prepared to go all in--but is it for the promotion or to finally win Flynn's wary heart?
Ah, I adored Frog and Firecracker's story, Frog being JT and Firecracker being Flynn. There was a fair bit of heartache that was lingering between these two, and the history that they had was definitely interesting. Add in the rivalry that was still ongoing between their families, and it was almost as if the odds were stacked against them. But love conquers all, even if it does take a bit for them to battle through the insecurities, misunderstandings, and challenges. The main characters truly were the stars of this series starter, but the rest of the cast definitely were not the type you'd thumb your nose at. Talk about notable quirky supporting characters and quite a few that more than piqued my curiosity, which is a good thing since that means I'm itching to read the books to come in this adorably promising series, thanks to a 4.5-star Firecracker of a beginning.
Release Date: 29 November 2022
Date Read: 28 November 2022
Learn more about Lucy Lennox and May Archer.
Pre-order Firecracker on Amazon.