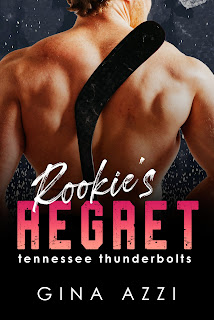 Note: An advance reader copy (ARC) was provided by the author via Give Me Books Promotions.
Rookie's Regret is the third book in the Tennessee Thunderbolts hockey romance series penned by Gina Azzi. This is Cole Phillips and Beatrice Turner's story, Cole being the Bolts' rookie, and Bea the youngest sibling--and only sister--of Beau, who just happens to be Cole's teammate. He immediately notices her as she learns the ropes of manning the The Honeycomb's pop-up shop at the stadium. A distraction is something Cole can't really afford right now, not that he could have allowed himself any bit of folly over the past few years. He's kept his eye on the prize, and he knows he needs to continue to prove his worth. But Bea is no mere temptation--she's like a beacon (pun intended!), one that Cole finds difficult to turn away from. However, he believes Bea deserves a life better than any a pro hockey player like him could offer her. If he lets her go, will Cole forever regret it?
Third time's the charm because I do think I've just found my favorite read in Gina Azzi's Tennessee Thunderbolts series (so far). Cole and Bea most certainly delivered when it came to the feels, making them a couple that I not only could get behind, but that I found myself becoming invested in the longer I read the book. Bea is mentioned to being twenty-three, and I'm guessing that Cole is more or less the same age, and they're both at points in their lives where they find themselves starting new chapters. I quite enjoyed seeing these two have such a strong connection, watching that spark grow into something bright, with potential to be long-lasting. In as much as this was a romance, it was also about family--the one you're born into and the one you create with your friends and your teammates. I'm awarding Rookie's Regret 4.5 stars, and cannot wait to see what's up next!
-------------------------
Read my reviews for the Tennessee Thunderbolts series: