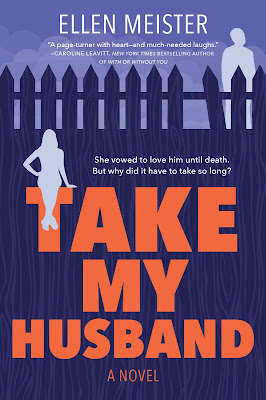 Take My Husband
by Ellen Meister
Date Released: August 30, 2022
MIRA Books
About Take My Husband
A witty, insightful domestic comedy about one woman's unexpected, thought-provoking journey out of her marriage as she realizes how much better off she would be if her husband had not survived a serious car crash.
When Laurel Appelbaum gets a call at work from the local hospital informing her that her unemployed husband Doug has been in a serious car accident, she is in shock. Summoned immediately to his bedside, she doesn't know in what condition she will find him. As she rushes to the ER, her mind is full of dire thoughts of this abrupt and unpredictable end to her marriage...that is until she remembers the large life insurance policy they are carrying in his name.
Suddenly Laurel can't help but imagine what a life on her own might look like...a new little cottage perhaps, the dog she has always wanted but can't have because of Doug's allergies, and the money to travel to see their only son. By the time she arrives she is ready to assume the role of grieving widow, only to find Doug sitting on a gurney, annoyed that she has taken so long to come pick him up. All of the tiny assaults on her freedom and dignity that have chipped away at their marriage and her happiness over the years flood in. She realizes now that she is finally ready to journey out of her marriage because the life really at stake is her own. She just has to figure out how to do it.