Review: Rebel by Ginger Scott (The Boys of Welles #2) 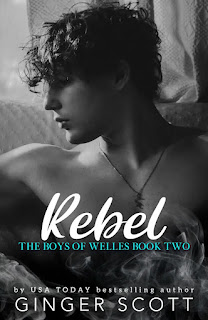 Focus on your hand, Cameron. Keep her warm. Remember her legs. Show her how to recover. Keep her from falling. Do not fall yourself.

Cam and Brooky. Brooky and Cam. I absolutely floved these two together! Gah! These two are the main characters in Rebel, the second novel in Ginger Scott's Boys of Welles series. This book does work well enough as a standalone, although I do happen to be one of those readers who prefers reading books in a series in order so as to avoid any potential spoilers and track, if any, a continuing story arc. But if you aren't a stickler for that sort of thing, you can pretty much jump into this new book and not feel like something's missing.
Rebel is the story of Brooklyn Bennett and Cameron Hass, both eighteen and in sixth form at the prestigious Welles Academy. The two have been friends for years, belonging to the same group of friends in Welles. They're as opposite as two people can be--she being the rule follower who does what's expected of her; he the risk taker with a reputation for not taking much of anything seriously. But a tragic accident last year becomes a harbinger for change, and the most unexpected of changes could very well be what happens between Cam and his Brooky. However, not everyone's rooting for these two to be or stay together.
Let me say it again: I FLOVED THIS BOOK! Brooklyn and Cameron may have seemed like an unlikely pairing to everyone around them, but they just made sense to me. He was encouraging and supportive, ensuring Brooklyn that he would be there to catch her if and when she'd fall. On the other hand, she becomes Cameron's touchstone, inspiring him to be the best version of himself and reminding him that she's by his side no matter what. I loved seeing the growth of these main characters, and the story angle regarding their respective families had me intrigued throughout. Ginger Scott delivered one heck of a wonderful story with Rebel, which gets five-plus stars, and I cannot wait for book three!
-------------------------
Read my reviews for the Boys of Welles series: