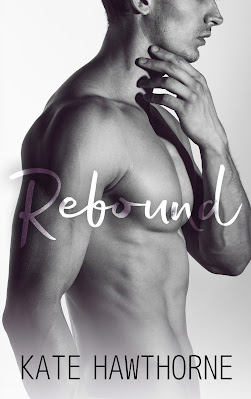 Rebound
by Kate Hawthorne
Release Date: September 8, 2022
About Rebound
They say the best way to get over someone is to get under someone else…
At least that's what Ben is trying to convince himself is true. Ready to put his ex-boyfriend in the rear view for good, he connects with a handsome older man who's only interested in something quick and casual. Their rules are simple—no strings, no feelings, and absolutely no kissing.
Thomas has never been with a man before, but in the midst of divorcing his estranged wife, he knows it's something he is ready to act on. He's wondered for years if his attraction to men is something real, so hooking up with an experienced and gorgeous younger man seems like a surefire way to find out. Better yet, it’ll kill two birds with one stone: exploring the depths of his midlife awakening and moving forward into a brand kind of new life.
One time together turns into two times, and two turns into something regular, but the rules still apply… until they don't. Late night phone calls lead to early evening dinner dates, and one by one the rules are all out the window.
Ben was supposed to be Thomas's first time, and Thomas was supposed to be Ben's rebound...but what if the best way to get over someone is also the best way to fall in love?
Rebound is a 75,000-word romance with a midlife sexual awakening, plenty of firsts, unexpected feelings, and a steamy happy ending. 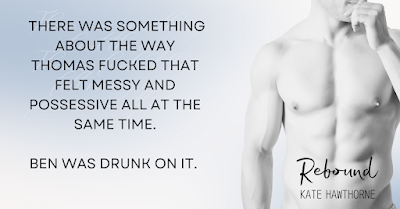 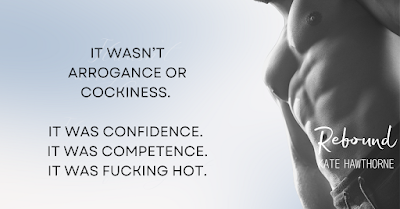 An Excerpt from Rebound
Ben’s cheeks burned. “There’s a difference between talking dirty and offering up a how-to guide.”
“Do I need a step-by-step?” Thomas looked up at him with an arched brow. His expression was decidedly smug, like he knew he was good in bed without instruction. That if Ben did offer him a little guidance…he could be great.
“No,” he conceded. “But it wouldn’t hurt for you to finesse your technique a little.”
“Finesse.”
Thomas looked at him in disbelief, taking a drink of his wine but not breaking away from Ben’s gaze. Ben, for his part, was enraptured. The Thomas sitting across from him was almost like a whole new version of himself. At least as far as Ben knew. To him, it seemed that giving Thomas the space to admit his sexuality had empowered him to speak freely about the things he wanted, the things he was good at. It wasn’t arrogance or cockiness. It was confidence. It was competence. It was fucking hot.
“There’s things that you can learn,” he said.
“Practice makes perfect.”
Was Ben imagining things, or had Thomas’s voice slipped down a register with that ask? Ben shifted his weight, thankful he’d put a shirt on, but regretful he hadn’t opted for pants. The underwear did little to hide the interested bulge between his legs.
“Is that what you’re looking for?” Ben asked. “Someone to practice on?”
“Practice with,” Thomas corrected.
“Casually.”
“Formally.”
Now it was Ben’s turn to arch a brow. That wasn’t anywhere close to what they’d talked about the first time.
“Not committed,” Thomas amended. “Well…”
“Exclusive,” he supplied. “But not serious.”
“Right.” Ben didn’t have enough wine in his glass—or the bottle—to have this conversation.
“I’ll go get tested,” Thomas said.
Ben swallowed, dragging his tongue across the front of his teeth. “Why?”
“What I said earlier still stands. I don’t like condoms.”
“You’re not the only person in this…this…formally exclusive casual arrangement.”
“Did you want to keep using them?” Thomas asked.
“I feel like this conversation has gotten away from me.” He topped off his wine and took a large swallow. “You were just coming out of the closet at me and now you’re talking about fucking me bare.”
“Well, when you say it like that…” 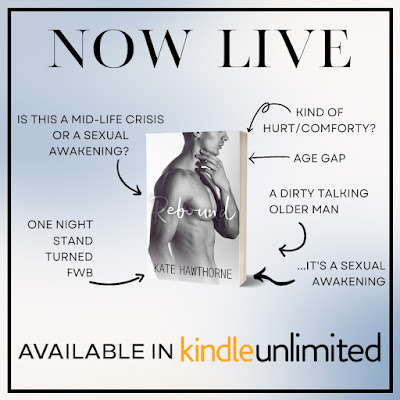 About Kate Hawthorne
With over two dozen published romances to her name, Kate Hawthorne has built a recognizable brand around telling emotional stories that pack a figurative (and sometimes literal) punch.
Existing on a steady diet of wine and coffee, Kate spends her days dreaming up angsty stories full of heat, kink, and heart. Kate now lives in Louisville, where she writes romance, reads romance, and hides from the humidity.
Connect with Kate
Website | Facebook | Facebook Group | Twitter | Instagram | TikTok | Goodreads | BookBub | Amazon | Newsletter 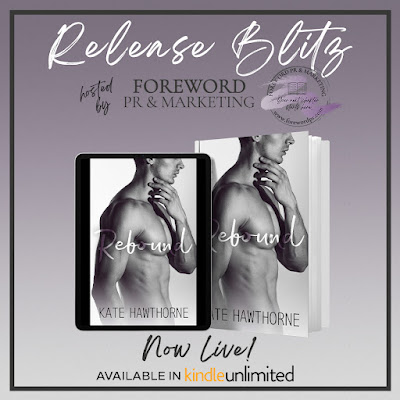