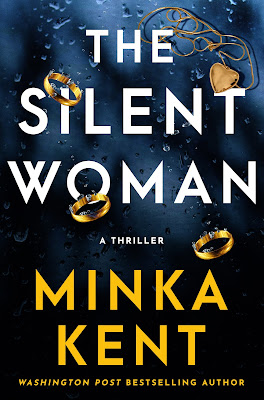 The Silent Woman
by Minka Kent
Release Date: September 27, 2022
About The Silent Woman
Newlywed Jade Westmore has finally found her forever in husband Wells, a charming, successful, and recently divorced architect—only there’s one caveat. Behind the gates of their elysian estate, hidden from street view in the caretaker’s cottage … lives Wells’ first wife, Sylvie.
Three years ago, the original Mrs. Westmore suffered an unfortunate accident—and hasn’t uttered a sound since. Not a physician, psychologist, or world-renowned specialist has been able to elicit so much as a word from the silent woman … until now.
On an ordinary Tuesday while Wells was away—despite instructions to never disturb the fragile woman—Jade visited her isolated predecessor bearing a peace offering: a bouquet of white lilies. Only she wasn’t expecting Sylvie to have something for her as well: a slip of torn notebook paper with a single word scrawled in shaky black ink.
That word? Run.

About Minka Kent
Minka Kent has been crafting stories since before she could scribble her name. With a love of the literary dark and twisted, Minka cut her teeth on Goosebumps and Fear Street, graduated to Stephen King as a teenager, and now counts Gillian Flynn, Chevy Stevens, and Caroline Kepnes amongst her favorite authors and biggest influences. Minka has always been curious about good people who do bad things and loves to explore what happens when larger-than-life characters are placed in fascinating situations.
In her non-writing life, Minka is a thirty-something wife and mother who equally enjoys sunny and rainy days, loves freshly cut hydrangeas, hides behind oversized sunglasses, travels to warmer climates every chance she gets, and bakes sweet treats when the mood strikes (spoiler alert: it’s often).
Connect with Minka
Website | Facebook | Instagram | Goodreads | Amazon