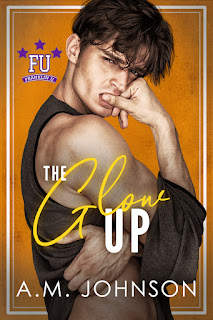 "It took me a second to get back on track, but not once did I ever stop trying to figure out a way to come back to you."

With the release of A.M. Johnson's The Glow Up, I've gone past the halfway mark of the multi-author Franklin U series, and dare I say that this fifth book is the best one among all the released novels so far. This M/M college romance features Christopher "Chris" Delaney and Aiden Russo, and just like the other books in the series, this can be read as a standalone, although there are several recurring characters and there may be potential spoilers regarding their stories. That being  said, you can start with this one and check out the previously released books afterwards because they've been good, fun-filled reads.
Both main characters are juniors attending Franklin University, Chris Delaney being a business major working towards a certificate in massage therapy, and Aiden Russo being a pre-med student on a full scholarship. Chris has had a crush on Aiden ever since he spotted him in the greenhouse on campus during their freshman year. Over the past couple of years, Chris lives for the glimpses he gets of Aiden, but he's yet to work up the courage to talk to him. Until an embarrassing massage session sparks something neither was expecting. They're two different people, but there's no denying the connection between them. Could Chris be the light which guides Aiden to the end of his dark tunnel?
This book... Le sigh. I absolutely adored every single thing about Chris and Aiden's story. These two made my smile, and their journey was a heartwarming one. They were opposites, but they balanced each other out so well, like puzzle pieces that slotted perfectly together. Theirs was a fairly lighthearted tale, but there was a dash of angst to it courtesy of the burdens weighing Aiden down. I loved seeing the growth in both the main characters, as well as in the relationship they were creating and building as a couple. Being emotionally invested in Chris and Aiden was as easy, and I swear, reading their book has been the highlight of my week. Bonus points go to Tommy and Dean--awesome allies and roomies FTW! A.M. Johnson never disappoints. Five-plus stars for The Glow Up!
Release Date: 22 September 2022
Date Read: 19 September 2022
Learn more about A.M. Johnson.
Purchase The Glow Up on Amazon.