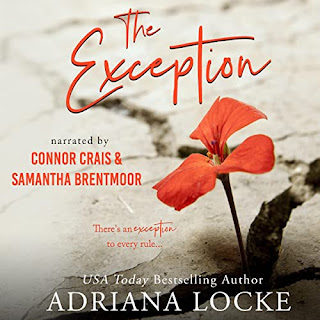 Note: The audiobook was provided by the author.
I've been reading Adriana Locke's books ever since I discovered her writing back in 2016 by way of Swing, the first in her Landry Family series, and I've listened to a handful of her audiobooks, i.e. her Dogwood Lane and Honey Creek series, as well (Thank you, Whispersync!). I've been hoping to check out her back list (everything pre-Landrys), and I finally get to start with her debut story, and it's in audio to boot, so color me super happy!
The Exception is the first in the series by the same title, and it's narrated by Connor Crais and Samantha Brentmoor, the former being one of my favorite male narrators, and the latter being a new-to-me narrator. This is also the book that has Cane Alexander as its male main character, and he has to be one of the most mentioned heroes Adriana Locke has ever created. So naturally, I was curious to see if he lived up to the hype.
Jada Stanley is a woman who wants to firmly leave her last relationship behind her. Moving forward, she has set rules that she believes will ensure she won't make the same mistakes with any man. Then along came Cane Alexander, and he isn't like any other man Jada has ever met. He's got rules of his own, and in all his years, he's never broken those rules, not for any woman. But Jada isn't like the women who came before her.
I'll be honest: I wasn't a fan of Cane's for a good portion of this story. What turned things around for me, though, was seeing how much growth he went through later on. Same goes for Jada. Their romance highlights how true love can bring the best changes in people. Connor Crais and Samantha Brentmoor were fantastic narrators, truly bringing Adriana Locke's story to life. The Exception audiobook receives four stars.
Date Listened to: 17 September 2022
Learn more about Adriana Locke.
Purchase The Exception on Amazon.