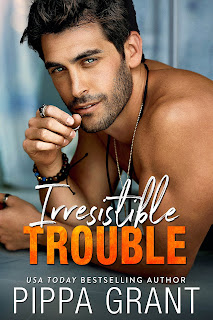 I'm a fucking disaster. But if that's what she likes, I'll be a damn disaster every day of the week.

Two words: Cooper Rock(s)! When Pippa Grant let readers know that one of her most significant supporting characters ever was finally going to get his own book, I may or may not have done a happy dance. Irresistible Trouble is the fourth book in the Copper Valley Fireballs series, and yes, this is Cooper's novel, and it just happens to be a second-chance romance. Say what?! Yep, the guy who's been in numerous other books with a reputation for having his way with the ladies has actually caught feelings in the past. He's always made it clear that he loved three things: his family, his team, and baseball. But eight years ago, there was this girl, and he was smitten. However, they were both on the cusp of promising careers--twenty-two-year-old Cooper as part of the Fireballs, and nineteen-year-old Waverly Sweet as a singer and performer. He was deemed unworthy of her then. Eight years later, he may be a baseball star, but she is a music superstar. This time around, though, Cooper is prepared to show that Waverly is truly worth fighting for.
GAH! This bears repeating: Cooper. Rock(s)! He was both irresistible and the best kind of trouble, absolutely living up to the book's title. Prior to reading Irresistible Trouble, Hayes Rutherford (The Last Eligible Billionaire) was my reigning Pippa Grant hero of all heroes; now, Cooper shares that title with Hayes and deservedly so. And hey, Waverly was no slouch either. I liked seeing her stand up for herself more and more. There was so much more to both Cooper and Waverly, and I appreciated that they had a good deal of character development to them. I absolutely adored these two, and their story did my heart well. Of course, there were cameo appearances from quite a few of Grant's other established couples, and not just the ones from the Copper Valley Fireballs series either. And can I just say that Diego Estevez was my favorite supporting character? Too cute for words, especially when it came to his fanboying over Waverly and reverence for Mr. Cooper. Irresistible Trouble was simply a joy to read, which is why it snags five-plus stars.
--------------------------

Read my reviews for the Copper Valley Fireballs series: