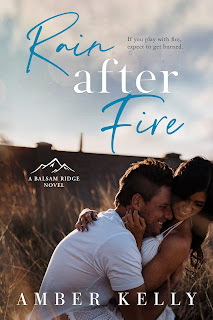 Note: An advance reader copy (ARC) was provided by the author via Wordsmith Publicity.
Rain After Fire is the third book in the Balsam Ridge series from Amber Kelly, and it's a fake relationship romance featuring the third youngest (or fourth oldest) among the Tuttle brothers, Corbin. Thirty-seven-year-old Corbin Tuttle is Valley Fire and Rescue's chief, and for the first few chapters of the story, he's in a long-term but rather tumultuous relationship. His girlfriend's latest antics become the proverbial straw that breaks the camel's back. His family and friends are a tad wary about this new development since they're more than aware of the ups and downs of the relationship, but when they learn that Corbin's got a date with the fiery bartender at the Appalachian Ridge Brewery, they're happily surprised. He was actually moving on and rediscovering happiness again.
What they don't know is that twenty-nine-year-old Maxine Buffton was the one who offered to fake date Corbin in order to show his ex that he'd moved on. He would finally be able to let go of a relationship that had slowly but surely deteriorated over the years, and she would have done a good thing of sorts helping out a nice guy like Balsam Ridge's fire chief. Of course, any extra-curricular activities they engage in were a bonus. A fling was exactly what they both needed. He was on the rebound, and she wasn't looking for forever, not when she's witnessed first-hand the harm that love and marriage can cause. The plan was always for it to be temporary--for Maxi to leave when the time came to move on to whatever came next. But Corbin and the town of Balsam Ridge changed it all.
Fake relationship romances tend to follow the same road map: fake becomes real. As a reader, I look for the author's originality and creativity, eager to see how their story will stand out. With Amber Kelly's third Balsam Ridge novel, it was all about the main characters, Maxi and Corbin. While Corbin was, at his very core, someone with simple wants, needs, and hopes, Maxi was quite a complex woman who had grown up in an immediate family that left her with emotional scars. I loved getting to know these two, and seeing their fake relationship become this story that saw lust grow into love, a good man find forever with a good woman, and a wanderer find home and family in a small but mighty mountain town in Tennessee. Rain After Fire snags four stars out of five stars.
--------------------------
Read my reviews for the Balsam Ridge series: