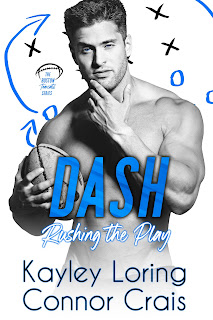 Note: An advance reader copy (ARC) was provided by the authors.
Dash: Rushing the Play is the second novel in the Boston Tomcats from the writing duo of Kayley Loring and Connor Crais, and this sports romance exceeded any and all of my expectations for it. The titular character is Dashiel--although I'm honestly not sure if that really is his actual first name--Taylor, a defensive end in his rookie year with the Boston Tomcats. His story, however, begins a couple of years prior as a college junior at Northern University and a player with the school's hockey team, the Honey Badgers. Talent for the sport was a given when it came to Dash even back then, but he certainly needed some tweaking and a whole lot of humility. His coach's solution? Private ballet lessons with twenty-year-old Charlotte Bardot, a ballerina with aspirations of joining the New York Ballet. Charlie teaches Dash some moves, but putting the moves on her isn't as easy as he expected, not when was constantly turning him down. Fast forward two years with them both in Boston, and now Dash is ready to make a play for the ballerina girl who got away.
The idea of football and ballet together may seem like a weird one, but ballet is actually something that's been used as extra bit of training for athletes--and not just in football either! I liked how Kayley Loring and Connor Crais took that idea and ran with it, bringing together main characters who may not have initially made sense together, but as their story progressed and Dash and Charlie evolved and developed, being with anyone other than each other would have been wrong. Dash definitely surprised the heck out of me, and I loved the growth his character went through, both as a player and as a person. Meeting and being with Charlie turned out to be a game changer for him. The same could be said for how Dash was for Charlie. Along with the romance was the humor, and there was even a bit of angst, enough to satisfy the angst addict in me. Dash: Rushing the Play is a five-star read, and I cannot wait for more from this fun-filled series.
-------------------------
Read my reviews for the Boston Tomcats series: