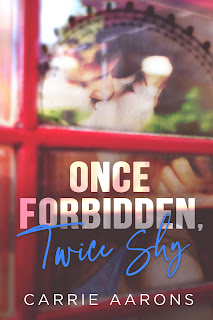 Note: An advance reader copy (ARC) was provided by the author.
Once Forbidden, Twice Shy is penned by Carrie Aarons, and it's a falling-for-your-sibling's-best-friend, second-chance romance standalone mostly set in London. Taylor Arnold left behind New York in hopes of getting a fresh and much-needed start across the pond. The last thing person she expects to find is her older brother's best friend, Jack Merrick. Not only are they in the same city, but they work in the same company--with Jack as Taylor's boss. After the way he upped and left without a word of goodbye after sharing an unforgettable night after her college graduation party, Taylor's had the past four years to mend her broken heart. Now though, there's nowhere for either of them to run, and the push and pull is getting to them. When the trauma of what happened to her in New York kicks in, it's Jack who's there to help soothe Taylor's frayed thoughts and emotions. It's clear that the feelings once there have remained and are very much reciprocated. But if the complication before was Taylor's family, there's more on the line for them both this time around.
Talk about a hard-earned happily-ever-after! Taylor and Jack's story was fraught with complications. There was Taylor being Jack's best friend's younger sister and Jack having been welcomed by Taylor's parents like family. Add to that the whole issue with Jack being Taylor's boss, and it's almost as if fate was working against them. There's also the matter of a secret that Jack has kept from her. Or maybe it just wanted to make a point: that theirs was something that had to be fought for and was worth all that effort. Your heart breaks for both of them, but as stacked as the odds may have been against them, having them finally get to their HEA was rather satisfying, if a tad rushed. Also, I found it weird that Oreos were made to seem like such a delicacy that couldn't be found in London. I may not live there, but I have friends who do, and even they said that you can easily find and get that particular cookie brand in shops, albeit the taste is a wee bit different according to them. Chocolate sandwich cookies aside, Once Forbidden, Twice Shy was a good, four-star read.
Release Date: 23 September 2022
Date Read: 21 September 2022
Learn more about Carrie Aarons.
Purchase Once Forbidden, Twice Shy on Amazon.