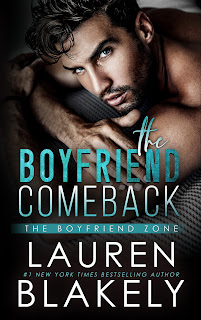 Note: An advance reader copy (ARC) was provided by the author.
The Boyfriend Comeback has been one of my most anticipated reads for 2022 ever since Lauren Blakely announced it as a future release, and boy, oh boy, has she delivered! This is the first in Blakely's Boyfriend Zone series, with all books being M/M romances, at least the three that have been scheduled for publication. There is a free prequel novella, The Boyfriend Kickoff, that tells the story of when the main characters, Jason McKay and Beck Cafferty, meet and the circumstances that have them going from friendly to flirty to frosty. If you haven't gotten around to reading that, it is included in the full-length novel.
Falling for your teammate is one thing, but falling for the guy on the team yours shares a crosstown rivalry with is every bit as complicated as it sounds. When Beck Cafferty first met Jason McKay, they were both quarterbacks for professional football teams--Beck with the Los Angeles Mercenaries and Jason with the San Francisco Hawks. One hookup, one ghosting, and one year later, Beck has just been traded to the San Francisco Renegades. They're now in the same city, but their teams are crosstown rivals, and with the PR push both teams want--to play up their rivalry on a weekly basis on a weekly podcast. Maybe this could be the start of a beautiful friendship between rivals; or maybe it's the restart of something much more than either of them are prepared for. All's fair in love and football.
Why is it that almost every time Lauren Blakely releases a new M/M romance, whoever the main couple is becomes my new favorite? I loved Jason and Beck! After what happened in The Boyfriend Kickoff, I couldn't wait to find out how these two were going to get together again, especially with how they'd left things between them. There was a whole lot of slow burn deliciousness going on in The Boyfriend Comeback, and the push and pull that was happening certainly amped things up. Blakely brought the romance while also highlighting the importance of love, friendship, and acceptance. Oh, and let's not forget the football! If this series starter was a five-star read, consider the bar set high.
Release Date: 13 September 2022
Date Read: 11 September 2022
Learn more about Lauren Blakely.
Purchase The Boyfriend Comeback on Amazon | Apple Books | B&N | Kobo.