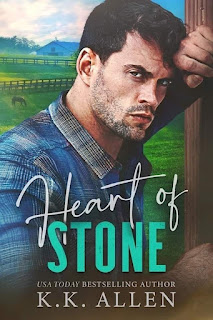 Note: An advance reader copy (ARC) was provided by the author via Wildfire Marketing.
Heart of Stone is the third book in the Camp Bexley series, which I used to call the Bexley Brothers series, from K.K. Allen. This hate-to-love romance features Benson Bexley, the Bexley brother who left their hometown after high school graduation and has made a point of keeping his distance--that is, until the youngest among the brothers, Cayson, suffered a traumatic accident while in the Air Force. Wanting to be there for Cayson as he recovers is one thing, but there's an itch under his skin that has Benson wanting to limit his time at the family-owned Camp Bexley. So, he signs up for a mixed media art class, and while he's unsure of how that'll go, one perk is the gorgeous woman who's not only part of the class but is the one who teaches it--Brooklyn Kennedy. Turns out they went to school together, but while he doesn't remember her, she's never forgotten him or what he did their senior year. Maybe it's time for a little payback--as long as she doesn't fall again.
On the surface, Benson was the epitome of a cocky man who enjoyed the life of a wanderer, refusing to return home and face the ghosts of his past, one that saw him lose his twin brother, Tyson. I wasn't a huge fan of Benny's, to be perfectly honest. But then the layers started to be peeled back, and I began to see that more vulnerable side of him that he kept hidden. I think being back in his hometown, specifically on the grounds of Camp Bexley, and spending time with not just Brooklyn but his family as well, forced him to take stock of the past and the present. There's a fair bit of angst in this story, but it also, surprisingly enough, had quite a lot of steamier moments between Benson and Brooklyn. Now, I'm not a prude who shies away from sex, but this was a case of too much of a good thing for me. That aside, Heart of Stone was a beautiful story of family and forgiveness, and the power love and support can have when moving forward. I am giving it four stars.
------------------------
Read my reviews for the Camp Bexley series: