Review: Mine to Cherish by Natasha Madison (Southern Weddings #3) 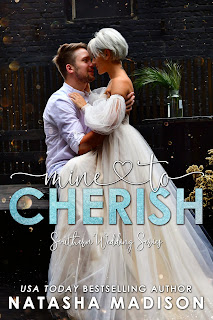 Note: An advance reader copy (ARC) was provided by the author via Wildfire Marketing.
Mine to Cherish is the third book in the Southern Weddings series from Natasha Madison, and the next Baker sibling to kinda-sorta-maybe-not walk down the aisle is Clarabella. After a surprise thirtieth birthday party turns into a very public marriage proposal, she and her fiance have rushed to get everything ready in a short period of time. She never expected to be surprised two more times before she actually walked down the aisle: one involving her one-time hook-up, the other having to do with her groom-to-be's ex. Who'd have thought the latter would lead to Clarabella to go from blushing bride to a runaway one and straight into the truck of the former. The last thing she wants is to be stuck in a cabin with the guy who broke her heart years ago, but Luke (whose last name I don't recall being mentioned) may be the one to mend and cherish it, if she gives him a chance.
When it comes to first weddings, third time's definitely not the charm for the Baker siblings! I wouldn't necessarily call it bad luck, though, considering the fact that the three who have gotten their books so far share their happily-ever-afters with the ones they were meant to be with. Clarabella may be no-nonsense, especially when it comes to work, and refused to be a pushover, but she was also very conscious when it came to public perception. I understood why she wasn't exactly eager to shout about her rekindled romance with Luke from atop the rooftops, and kudos to Luke for being as understanding and as patient as he was. I enjoyed seeing these two get their act together, making Mine to Cherish a 4.5-starred read. And now that three of the Baker siblings have gotten their HEAs, I'm so eager to find out what awaits Presley and her brother's best friend, Bennett.
------------------------
Read my reviews for the Southern Weddings series: