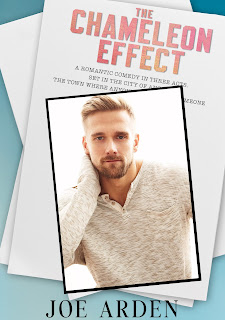 Note: An advance reader copy (ARC) was provided by the author via Wordsmith Publicity.
The Chameleon Effect is a standalone contemporary romance and the first one solely written by award-winning narrator Joe Arden, whose previous release was a co-written novel in 2021 with bestselling author Lauren Blakely. Arden introduces readers to William O'Connell, a twenty-six-year-old aspiring actor who knows he's got what it takes to make in the entertainment industry, if only he could figure out what it is that seems to not be clicking with casting agents. Inspiration strikes when he's reminded of how good he is when it comes to accents, and he decides to go from Will O'Connell, homegrown guy from Ohio to Liam O'Connell, Irishman from Dublin. Surprisingly, the switch works! He doesn't anticipate, however, meeting costumer Raven Locke. She's a game changer who makes him want more with her, but will she want less of him once she learns the truth?
Joe Arden's debut as a solo author has been rather anticipated by countless romance readers, and his story about an actor who takes on a fake identity lives up to expectation. Told almost exclusively from the male main character's viewpoint--with occasional musings from that of the female main character's by way of "interludes" that are actually her TikTok posts--The Chameleon Effect was very much like its hero: utterly charming with a good balance of naughty and nice. Will was easily likable, and Raven equally so, and as a couple, they had the sort of chemistry that made you believe that they belonged together. The book also felt like a love letter to Los Angeles, a city I've only had the pleasure of visiting once, but it certainly made an impression on me, in all the best ways. And just like LA, Arden's notable romance has left me rather impressed as well. 4.5 stars.
Date Read: 11 September 2022
Learn more about Joe Arden.
Purchase The Chameleon Effect on Amazon.