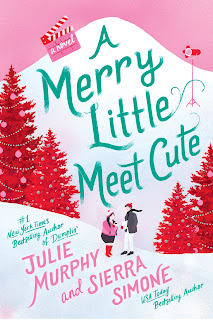 Note: An advance reader copy (ARC) was provided by HarperCollins Publishers.
A Merry Little Meet Cute is the first time bestselling authors Julie Murphy and Sierra Simone have joined writing forces, and suffice it to say that I've been super curious how their writing styles would mesh. Published by HarperCollins Publishers via their Avon imprint, readers are introduced to the interesting pairing of a plus-sized adult film star and a former boy band pop star who are cast in a Christmas made-for-television movie in the most of idyllic of locations, Christmas Notch, Vermont. Bee Hobbes, better known as Bianca Von Honey to adult film connoisseurs and her online subscribers, makes no apologies for her career choices. However, the opportunity to break through to mainstream--squeaky clean--fare is a challenge she'd be foolish to not accept, so when her favorite producer kinda-sorta-maybe serendipitously casts her in the lead of a holiday TV movie, she goes for it. Having Nolan Shaw, the guy she crushed on while he was part of a popular boy band, is a bonus. But as much as Bee has tried to keep her porn past under wraps, Nolan is more than familiar with it. With so much on the line for both of them, engaging fun and dirty shenanigans is a bad idea. But being together is a temptation neither can resists--as is digging dirt on this unlikely coupling.
Not only was this holiday romantic comedy a merry read, but it brought a bit of that bright(ness) that I didn't realize I needed on what had been a rather gloomy day. Julie Murphy and Sierra Simone have managed to strike that delicate yet delicious balance between sweet and spicy, creating their own bit of sugary spiciness that had me eagerly flipping pages. Both Bee and Nolan were main characters who were easy to like, with a spark that was just begging to burst forth and engulf them both--in all the best ways, of course. I loved that Bee was someone who was secure in her own skin. Her confidence was a refreshing change from the usual insecure-dampened heroines that are faced with their celebrity fantasy. As for Nolan, he was exactly as I expected him to be, although surprisingly a tad dirtier, which isn't necessarily a bad thing. Kudos to these two embracing their bisexuality but not making it an overly bigger deal than it had to be. This was an immensely fun read, one that kept me entertained from the very beginning till the much deserved and quite happy end. Overall, whether you're new to either author or have read their work as individual authors in the past, A Merry Little Meet Cute is cute, Christmasy, and completely worth the read. I'm giving this four stars.
Release Date: 20 September 2022
Date Read: 18 September 2022
Learn more about Julie Murphy and Sierra Simone.
Pre-order A Merry Little Meet Cute on HarperCollins | Amazon | Apple Books | B&N | Kobo.