Review: Nobody Else's by Nell Iris 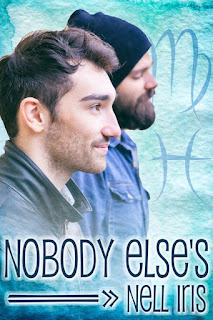 Nell Iris's newest novella was the perfect pick-me-up after having read a number of ho-hum novels. Nobody Else's was a really sweet and lighthearted read, one that brought a smile to my face. It's about twenty-six-year-old accountant Beckett Cooper who's been crushing on his best friend's younger brother for years. Younger than Beckett by three years, Levi Byrne is one of the good guys, someone who puts everyone else before himself. He's a great son and brother and even started his own successful company. What Beckett doesn't know is that Levi's had a thing for him as well, but Beckett is his older brother's best friend, not his. Will Beckett and Levi have to wait for the stars to align to take a chance at something they've been hoping and wishing for and become nobody else's?

If you've never read anything by this author, I'm recommending you check this latest release of hers out. I've read most of Nell Iris's books, save for two or three titles, and while I've enjoyed her writing, this most recent novella of hers is my favorite one so far. This was angst-free and while I'm an advocate of angsty reads, we all need something that doesn't have any drama or heaviness. Beckett and Levi were highly likable main characters and while Levi's family does have supporting roles in the story, this truly was all about Beckett and Levi. I liked the evolution of their relationship from being connected mostly through Matt--Beckett's best friend and Levi's older brother--to forging their own separate friendship and then dipping their toes into something more. Nobody Else's may have been a quickie read but it's one that lingered past "the end". For a feel-good romance, check this five-starred novella out. ♥