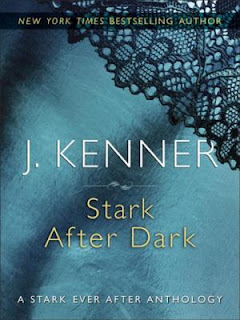 Stark After Dark is a Stark Ever After anthology and is a collection of four novellas that come after the third full-length novel in the Stark series, Complete Me: Take Me, Have Me, Play My Game, and Seduce Me. It does not include Tame Me, which falls between Take Me and Have Me, but this is understandable since that was about Jamie Archer and Ryan Hunter, and this anthology is solely focused on Damien Stark and Nikki Fairchild, who becomes Nikki Stark in the anthology. I read Take Me when it was initially released and read Tame Me as well since the events there follow immediately after those in the prior novella. While the novellas have different story lines, there is one particular arc that is present in all four and that has to do with someone intent on blackmailing and causing problems for the newly married pair.

Take Me features Damien and Nikki making preparations for their impending nuptials, but meddlesome people present more problems than solutions, taking away the thrill for the already anxious bride. Have Me has the happy couple basking in marital bliss, but Damien's plans to make their honeymoon a memorable one for Nikki go awry when their privacy is inevitably invaded. Play My Game showcases the more playful yet romantic side of Damien and Nikki is more than willing to play his Valentine's Day-inspired game, hoping to reap rewards that only her husband can give her. Last but not the least, Seduce Me has Damien and Nikki perfecting their art of seduction, one that involves a bit of pretending and role playing, but the fun may be derailed when their pasts continue to hound them without a true end in sight.

Fellow fans of the Stark series will surely enjoy this anthology because it gives us glimpses into Damien and Nikki Stark's life after happily-ever-after. It's clear that someone doesn't think they deserve to spend the rest of their lives being in love and continuing to be successful in both their personal and professional endeavors. We don't get the answer to the question as to who is trying to cause problems for them, though there are any number of suspects out there. It makes me wonder if there could be another full-length novel in the offing for the Stark series, because I read the two other novellas that follow Seduce Me, and the blackmailing arc has yet to be resolved. Since this is a collection of four novellas, it feels like an extended novel in terms of length but I was able to finish it quite quickly. Stark After Dark gets 4.5 stars. ♥