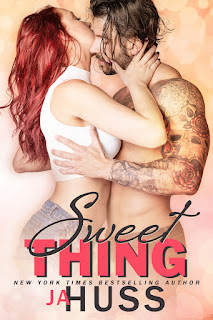 JA Huss's Sweet Thing may have a seemingly sweet and innocent female main character but the girl's got one heck of a saucy and spicy side as well! She's a couple of days away from turning eighteen, but Aria Amherst decides it's never too early to live like an adult. A bit of house- and cat-sitting while her older sister is away on a photo shoot during spring break is the perfect time for Aria to have an adventure of two. After all, she's led a very sheltered life, thanks to the over-protectiveness of her parents--her dad, in particular. She never expected the adventure to come in the form of Ryker North, a hot self-made businessman who plays drums as a hobby. Soon enough, it's clear that Ryker wouldn't mind, erm, playing with Aria. When he learns she's not quite legal yet, however, Ryker steps back and wonders if the hassle of being with someone much younger than his thirty-five years is worth it. Sure, he's always gone for younger women, but Aria is just TOO young. Right? Although maybe a one-night stand wouldn't be a bad thing. They'll both get what they want and move on. But what happens when they end up wanting more?

Can I just say that I found it oddly refreshing that this book had a male main character who owned up to the fact that he liked girls who were younger than him (no minors--think like ten years younger than his thirty-five) because he wanted to teach them a thing or two and sully them with his sexual prowess? There was no sugarcoating, although that doesn't mean that I think that makes him some hot guy. I just happen to appreciate his honesty. Speaking of which, I liked that both Ryker and Aria were almost always open when it came to communicating what they were thinking or feeling. The age difference wasn't as huge of an issue between the two of them, but seeing how other people reacted to him being thirty-five and her being eighteen was a reflection on how it usually is in real life. While not necessarily a quick read, I did finish this in about an hour and a half's time and it made for the perfect way to wrap up my day. It had the sweet and it had the steamy--just like both characters were naughty AND nice--and I'm looking forward to reading more of these shorter stories from JA Huss. Sweet Thing snags five stars. ♥

Read my reviews for the Naughty Things series: