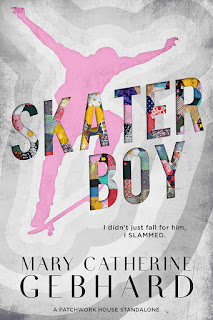 “You were the little girl we saved. Do you know how fucked it is that I fell in love with you?”

Did he say love?

“I love you,” he repeated like he knew my thoughts. “I've always loved you. I loved you even when it was wrong. I can't stop loving you. And I've tried. Relentlessly.” He said the last bit more to himself.

Holy. Wow. I went into my first ever Mary Catherine Gebhard read wishing the story would live up to the promise it seemed to have when I read the blurb, and to use the book's tagline: I didn't just fall for Skater Boy; I SLAMMED. The Patchwork House series starter was an introduction to the four Rebel Gods--all of whom I think could be getting their stories told, but this is mere guesswork on my part--Flip, King, Daniel, and Romeo, but the romance itself is about Flip and Tweetie, both of whom happen to be extremely gifted skateboarders. The Rebel Gods all lived together in the Patchwork House, which was always meant to be exclusively for guys...until Tweetie came along, that is. She was the exception to the rule, and she changed their lives as much as they did hers. But then she decides to leave, and it takes a couple of years for her to return, and it's one that coincides with the return of the guy who inspired her to skate--the guy she considered the greatest skateboarder: Flip. She had no idea Flip had ever even been part of Patchwork House, but she's about to learn that that's only secret that's been kept from her.

Okay, I'm going to be perfectly honest here: I had to put my tablet down after the first few chapters. It felt as if I was missing something, and you may notice that there are a number of reviews that echo the same sentiment. But after about an hour-long break, I went back in and am I glad that I did! If you're feeling the same way--lost and/or confused--I encourage you to continue reading! I promise, it'll all make sense, thanks to the dual points-of-view AND the flashbacks. Flip was fourteen and Tweetie was nine when their paths first crossed and we get to know them and their story as the years pass. I can't really go into detail because of potential spoilers, but again, I have three words for you: READ. THE. BOOK! Not only do we get this epic sort of romance between Flip and Tweetie--hello, slow burn!--but we get peeks at the friendship shared by the original four Rebel Gods plus a number of new people who are part of Patchwork House. I was more than impressed with Mary Catherine Gebhard's writing, and she's definitely got me itching for the rest of the series. This book was a wonderful reminder of why I loved watching the X Games as much as I did for years. I highly recommend Skater Boy; this 2019 fave gets five-plus stars. ♥