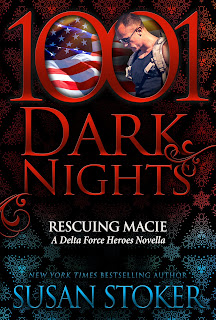 Note: An advanced reader copy (ARC) was provided by the publisher via InkSlinger PR.

The Delta Force Heroes series was my introduction to Susan Stoker's writing when I read the first book back in 2016, and while I've read a number of her other books outside of the series, the men and women--and children, too!--of Delta Force Heroes remain the nearest and dearest to my book-loving heart. Rescuing Macie is the newest release in the series, and this novella is a testament as to why Stoker is such a favorite among fans and lovers of the military romance sub-genre. With the author's trademark mix of romance, action, and suspense, not only was this a great addition to all things Delta Force Heroes, but it's also a great jumping point for the second Delta team!

When thirty-three-year-old Mercedes Laughlin hears two men talking about what they intend to do to her once they step foot in her bedroom, she escapes through her window and calls her brother, Ford aka Truck. It's the calming voice of his commanding officer, however, who helps soothes her anxiety, and it's also Colt Robertson who offers up his home as a refuge for Macie as the authorities investigate and search for their suspects. While everyone else sees him as Colonel Colton Robertson, he's just Colt to Macie, and the connection they shared during Truck's wedding remains as strong as ever. Having each other in such close quarters feels...right. Colt understands Macie better than anyone else, and now, he'll do everything possible to keep her safe from any harm.

I loved Colt and Macie! Theirs was a story that was both sweet and steamy, and I adored the fact that even if they already knew they had a connection unlike any other they've had before, they didn't jump right into sex. That doesn't mean I'm a proud, but it has to do with these two getting to know each other better and allowing them click in more ways than one and have a shot at being a couple. Macie's anxiety issues were handled in a sensitive manner, which is something I appreciated, especially since it was highlighted that she fought to have a "normal" life with Colt. Going into this, I was worried that it was the end of the series, but I now have hope that readers haven't seen the last of the Delta Force guys, either with the series continuing or moving forward with a spin--I suspect it's the latter. I'm already excited for what's to come! For now though, I'm giving Rescuing Macie five stars. ♥