Review: Promise Her by Andrea Johnston (Military Men of Lexington #1) 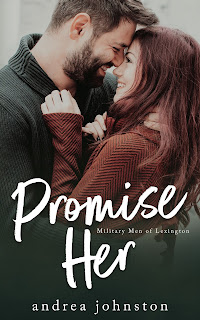 When I found out that Andrea Johnston was going to do a spin-off of her Country Road series, I couldn't wait to see what she had in store for her readers. Her brand-new Military Men of Lexington series is about three former military men and friends, and it starts off with the story of Taylor Cain--yes, THAT Taylor, aka Addison Montgomery's younger brother and owner of the bar named Country Road. When he receives a call letting him that his lifelong best friend was killed by a drunk driver, Taylor makes his way to the small town of Fayhill to be by his best friend's widow, Scarlett Gilbert, who also happens to be carrying her first child. Taylor promised Henry that he'd be there for Scarlett should anything ever happen to him, but Taylor doubts that included actually falling in love with his best friend's wife. The fact that Scarlett is falling for Taylor as well doesn't make things easier, not when Scarlett is keeping a secret from those nearest and dearest to her and Henry. Promises were made, but will breaking them mean betraying Henry's memory?

This book had romance, but it also happened to have a suspense element to it, one that was executed just as well as the romance, and that made me one very happy camper. I empathized with both Taylor and Scarlett and the quandary they found themselves in when their feelings for each other went from platonic to romantic. For the record, this wasn't about two people who had feelings even while Henry was still alive, which was something I appreciated since that route is the one that a lot of authors have chosen time and again. I loved seeing how the relationship between these two main characters developed over time, and how they themselves evolved into two people who loved Henry a great deal and now had to learn how to deal with the loss and how life would go moving forward. I'm also now really curious as to what awaits Taylor's friends and fellow former military men--Grant Ellison and Connor Hall--and if there are more military men joining the fray. Fingers crossed their stories are as good as Promise Her, which gets five stars. ♥

Purchase Promise Her on Amazon.