Review: Love Is a Beach by Lilliana Anderson 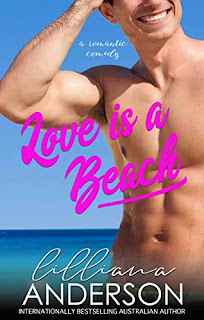 Ah, Lilliana Anderson can do no wrong, and I'm basing that opinion of mine on the fact that everything I've read from her so far--full disclosure: I haven't read EVERYTHING Anderson is written--has shown me that this author knows how to finely balance her humor with her angst, and that makes me a very happy bookaholic. With her newest standalone, Love Is a Beach, Anderson gives fans and readers the story of Darcy--a woman who spent the first half of her life as Darcy Field and then the next twenty as Darcy Sullivan only to now have to learn how to be Darcy Field: a forty-year-old divorcee and single mother to her fourteen-year-old daughter, Abigail, and her eight-year-old son, Archer. Finding solace after learning of the extent of her ex-husband's betrayal of her trust at her grandmother Esme's place by the beach has her crossing paths with Leo Murphy, forty-five and a retired professional rugby player and single father to his own teenage son, Niall. With a matchmaker grandmother, you'd think Darcy and Leo were perfectly matched, but timing is everything. Are they willing to wait, and for how long?

I've said this before and I'll say it again: I love romance novels in general, but I get a kick out of main characters who happen to be within my own age group, as was the case with both Darcy and Leo. These two were at a point in their lives where they were basically trying to start over. They could have been the poster children for the relationship status "It's complicated," but complicated provided a whole lot of laughs and even some tearing up. After all, Lilliana Anderson does humor with angst, and she does it well. The situation with the teenage kids had a realistic feel to it, and that, along with Darcy's and Leo's issues with their exes brought in the angst. The humor was courtesy of two scene-stealers and quite possibly my two favorite characters in the entire book, Esme and Archer. This isn't necessarily a quick read, but time felt like it passed quickly, and I was all in because it wasn't just Darcy and Leo who deserved to live happily-ever-after but their children as well. Oh, and let's not forget Esme but then I was never worried about her being happy because the one took life by the horns and simply lived and loved and did both with gusto. Anderson has yet another winner with this rom-com read. Love Is a Beach receives five stars. ♥