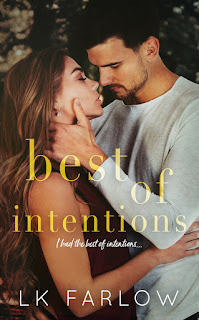 Best of Intentions is the latest release from LK Farlow and it's a companion novel to the author's previous release, Best Laid Plans. Because an upcoming release is already entitled Best of Me, I'm guessing they're three standalones that are more or less tied together, especially since we've got recurring characters. All that aside, this new novel is a falling-for-your-sibling's-best-friend story involving Nathaniel Reynolds, older brother to Natalie Reynolds and best friend of Alden Warner from Best Laid Plans, and Jenny Jones, best Natalie's best friend. Jenny's had a thing for Nate for years, and it's a crush that hasn't gone unnoticed by Nate. As attracted as Nate may be to Jenny, however, he knows that she's the sort of woman who wants the fairy tale--finding love and keeping it for a lifetime, complete with marriage, children, and the beautiful house. He knows he can't give her what she really needs, but each time he tries to stay away, he can't resist the draw he has to her whenever she's around. As strong as Jenny's feelings may be for Nate, she has to decide if she's willing to wait for a man who doesn't believe in commitment.

Confession time: I wasn't a fan of Nate's for most of this book. I swear, the guy kept justifying his ghosting of Jenny time and again, yet whenever she was happened to be in the same place he was, he would pounce on her and get "it" on. Then there was Jenny, who tried her damned best to move forward, but I guess she couldn't resist him all that much either. Sigh. And that's where I hesitated to give this book a higher rating. I wished Jenny had feelings for someone who deserved her love and devotion, and I wished Nate had done more to prove himself, but hey, I'm just the reader. The story itself was good, and I did pretty much enjoy the book even if I had my doubts when it came to Nate. Admittedly, I liked the first book in this kinda-sorta-maybe series better, but I did think Jenny was a great female main character who developed well as the story progressed. Both Alden and Nat from the previous book are supporting characters here, so fans of Best Laid Plans will see where they're at in their own relationship. Overall, Best of Intentions may not be my favorite LK Farlow read, but it was still an entertaining four-starred one. ♥

Purchase Best of Intentions on Amazon.