Review: Beauty and the Professor by Skye Warren (A Modern Fairy Tale #1) 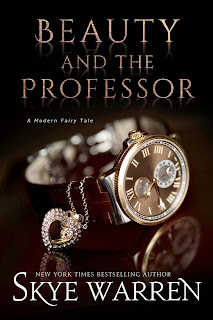 The original incarnation of Skye Warren's newly released A Modern Fairy Tale duet was one that I had read about five years ago through four episodic-styled releases: Beauty Touched the Beast, Beneath the Beauty, Broken Beauty, and Beauty Becomes You. When a fifth episode was published, Loving the Beast, a year later, I re-read the first four parts via the box set, Beauty & the Beast. This time around, Warren has put the first three parts together to form the first book--Beauty and the Professor--in this new duet and the last two parts will comprise the second book--Falling for the Beast--to be released one week afterwards. I've already read both books and while the story line remains the same, this new edition has been reworked to loosely tie with the author's Tanglewood universe.

Erin Rodriguez is a college student working as a housekeeper for Blake Morris, a scarred military veteran and former college professor. She's had a crush on him from the time he became her boss, but what she doesn't know is that she's been at the very center of Blake's fantasies since she stepped foot in his home. The fifteen-year age difference could already be a potential obstacle between them, what more the fact that Erin works for Blake, but when an offer for Blake to teach at the same university where Erin is a student at comes along, could it be yet another reason for these two to distance themselves from each other or will their feelings be too difficult to resist?

At its core, this book was still every bit as enjoyable as it was when I read the first three parts in 2013. Tying Erin and Blake's love story with Skye Warren's easily recognizable Tanglewood book universe was a smart move, and it's a small change to what essentially is still a romantic and hot read that has taboo elements to it because of the whole boss-employee slash professor-student slash decade and a half age difference aspect. Beauty and the Professor ends in a cliffhanger, but since I already know what happens next, no complaints on my end. Four stars. ♥