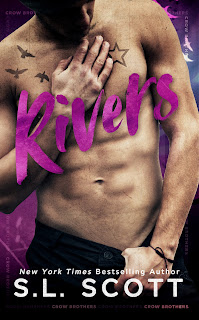 "When I said I loved you, those weren't just words to me."

"I'm coming back to you, Stella Lilith. There's no way I'm not."

In a week where I've read books that are more meh! than yeah!, Rivers provided a much needed respite from the mundane to the marvelous with its second chance love story and two erstwhile lovers who totally deserve their happily-ever-after five years in the making. Being the middle child, Rivers Crow has taken a step back, allowing his older and younger brothers to bask in it instead. It's not as if he craves the attention either. He prefers being in the background, but when it came to Stella Lilith Fellowes, he wanted her attention focused solely on him. They fell in love and made promises--promises which were broken when their paths separated, heading in different directions. Five years later, the dream Rivers shared with his brothers is finally coming true, and while he seems to be okay on the outside, that missing part of him in the shape of a girl named Stella has yet to be filled...that is, until they see each other again. They're not the same people they were when they were young and in love. There's a whole lot of hurt that still lingers from their breakup, but maybe if they let go of the past, they'll finally have a shot at a future.

This series just keeps getting better with every new installment S.L. Scott publishes--and the fact that it's going from a trilogy to a quartet has me rather excited to say the least--and while both Spark and Tulsa were fantastic reads, I confess that Rivers tops them both. Maybe it's the fact that Rivers called out to me more, what with both of us being middle children. This guy was seriously way too easy for me to love, and he had such a bittersweet history with Stella that I simply wanted both of them to reach that happy ending that I think they were owed for half a decade. But maybe the did need the time apart to better appreciate what it was they had with each other. They had a taste of success and failure, and saw things from fresher perspectives, without that so-called cloud of lust and love hovering over them and seeing only the good. Of course, aside from Rivers and Stella, Jet and Hannah and Tulsa and Crow are present and accounted for, and I'm curious as to how Ridge Carson's story is going to play out with the Crow Brothers book four coming in late September. For now, go check out the five-plus-starred Rivers. ♥

Read my reviews for the Crow Brothers series: