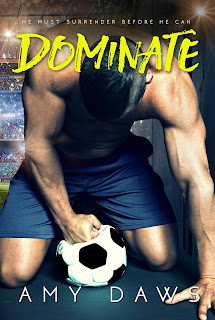 I clutch his body to mine, stare into his eyes, and accept his gloriously perfect words. And I wonder to myself when the hell I started falling for him, because there is no way this emotion inside of me is new. This is something that's been with me for some time now. It's familiar and comfortable.


First things first: I'm so frickin' glad that Amy Daws decided to release this novel early! It may have been right in time for her birthday, but fans and readers of the Harris Brothers series were the ones who got the amazing gift of getting read Dominate, especially after that cliffhanger of an ending in Surrender. Gareth Harris's and Sloan Montgomery's fates were hanging in the balance when we last saw them, and thank goodness there wasn't a whole lot of hemming and hawing because this sequel kicks into high gear from the get-go. So no, what happened to Gareth and Sloan wasn't unnecessarily dragged out for suspense's sake, but there aren't any immediate answers as to who did it or what the actual motivation was. Heck, I only figured out late in the game, but I'm getting ahead of myself here. Suffice it to say, this final--gasp! sob!--Harris Brothers novel was everything I wanted and far more!

Gareth Harris may be down, but he refuses to be out for the count. He's forced into taking a step back while recuperating from the injuries he sustained after what he and Sloan went through. While his professional life may have slowed down for a bit, his personal life is moving full steam ahead. He knows how he feels about the woman who may have started out as his personal stylist but has evolved into so much more. However, Sloan has her daughter to consider as well as her own insecurities and wariness when it comes to her feelings for the soccer--football!--star who now means more to her than she can say. And then there are their respective issues with family. Gareth and his father have been at odds for more than half his life and Sloan is struggling to find her footing with her ex-husband and his mother. Is there too much going on for Gareth and Sloan to make a true go at forever?

Gah! I absolutely loved this book. It exceeded any and all expectations, and now that I've fallen absolutely in love with this series, I'm now totally obsessed about making my way through Amy Daws's much earlier books, especially since this series is a spin-off of her London Lovers series. I don't want to give anything away in terms of plot, but I'm pretty sure it's not a secret that this DOES end in a happily-ever-after, and not just for Gareth and Sloan as a couple. We've got all of the Harris siblings present and accounted for, and we got to see not just where they're at, but see just how happy they all are and how they want the same for the eldest brother. I did shed a few tears while reading this book, particularly when it came to the familial relationships. Wait for Me may have put Daws on my radar, but I confess it was the Harris Brothers that's made her a favorite. Five-plus stars for Dominate. ♥

Read my reviews for the Final Harris Brother duet: