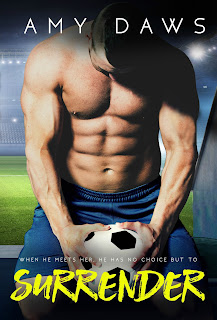 
This book! So. Frickin'. Good!!! Yeah, it's so good I'm starting this review off with incomplete sentences. Go me! But seriously, Surrender was far more than I could have hoped it would be, and it's impending release was what lit a fire under my butt and had me finally reading the first three novels in the Harris Brothers series (yes, yes, I should be ashamed it took me THIS long to actually read them!). Maybe I should call this the Year of the Amy Daws Book Binge since I listened to Wait for Me--my first ever Daws book--audiobook a couple of months ago and I'm just now all caught up with her series about her football playing brothers. I've also bumped her much earlier works up on my to-be-read list because it looks like they're loosely tied to one another and to the Harris Brothers series as well.

Okay, let's get on with the actual reviewing part of this post! Surrender is the story of the eldest Harris sibling, thirty-two-year-old Manchester United captain Gareth Harris. The man is the picture of control, neatly compartmentalizing his life and responsibilities. He cherishes his privacy even if it means staying holed up in his home in Astbury. His world revolves around his family and football, but being the oldest sibling and the one his sister and brothers rely on after their beloved mother passed away and their father checked out on them emotionally plus his duties as team captain have him wishing he could just let go. The last thing Gareth expects is to find the release he needs in the form of his gorgeous American stylist, twenty-nine-year-old Sloan Montgomery.

The first handful of chapters in this book overlap with events that played out in the Challenge, Endurance, and Keeper. While I'm not saying that you necessarily need to read those books in order to fully understand what goes on between Gareth and Sloan, I do recommend that you read them anyway in order to better comprehend the sort of relationship the Harris siblings have and the role each plays in the others' lives. The lone Harris sister's story plays out in That One Moment and A Perfect Moment, the second novel and a free epilogue novella, respectively, in the Lost in London duet, which I have yet to read. Again, this is just a suggestion on my part given that these siblings play major roles in one another's stories, and the same goes without saying in terms of Gareth's own tale.

I don't want to give away anything more than what was offered up in the book's official blurb because no one wants to be a party pooper for those who have yet to read Gareth and Sloan's story. What I'm willing to share is that this was a very hot read, one that I was totally into from the get-go. Because of the nature of their non-relationship, there are some secrets kept and a whole lot of complications that come with trying to maintain an off-the-radar arrangement, but boy do these two have a story to tell. Now, this is the first in a duet format, so it almost goes without saying that there's a cliffhanger that awaits; however, the wait in between books is only a couple of weeks, and I'm all antsy to get my hands on Dominate. Surrender is a five-plus-starred 2018 favorite read. ♥