Book Spotlight: From a Jack to a King by Scotty Cade 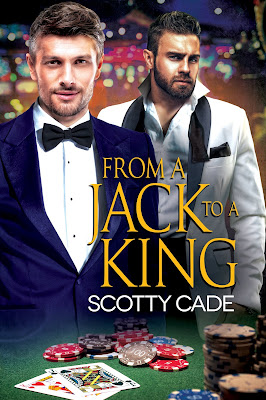 From a Jack to a King
by Scotty Cade
Date Released: July 3, 2018
Dreamspinner Press

About From a Jack to a King
New York Times best-selling mystery writer Bay Whitman leads the life of a celebrity—at least on the surface. In public he’s self-assured and in control. Women hang on his every word, while men envy his confidence and swagger. But in reality, Bay is a loner. He’s shy and introverted, and his life consists of sitting in a dimly lit room writing his famous Jack Robbins mystery novels. His one vice—gambling. Winning an escort in a poker game will change Bay’s life in ways he never imagined.

Matthew “King” Slater is one of the hottest tickets in gay porn. He spends his days in front of the camera and his nights as a highly paid escort to the rich and famous. Deep down, he craves romance and a real connection, but his past makes it hard to separate the needs of his body from those of his heart. For now, it’s easier to think of sex as just a job. But while doing a shoot in Vegas, King is hired for a tryst at a famous hotel and casino, and his handsome client might blur the line between work and play.

Read my four-starred review of From a Jack to a King.

Add From a Jack to a King on Goodreads.

An Excerpt from From a Jack to a King
Bay stared at the man standing outside his doorway in total shock. The man stuck out his hand and took a step toward him. “I’m King Slater.”

He was so close now, Bay could smell his spicy cologne. Bay accepted King’s hand and they shook. “Nice to meet you, King.” They locked eyes, and King seemed to be waiting for some sort of recognition. But his name didn’t ring a bell.

King appeared amused by Bay’s nervousness and discomfort. “I’ll show myself in,” he said, still smiling seductively at Bay.

Bay watched in amazement as King walked right past him. He had quite the swagger.

After quickly looking down the hall in both directions before closing the door, Bay followed King into the living room. King suddenly stopped, and Bay almost ran into his back. When King turned around, still grinning, he looked into Bay’s eyes, cupped the back of Bay’s neck, and pulled him close to press his lips against Bay’s in a slow, tender kiss.

A slew of reactions flooded Bay’s head. Stop him came first. Then before Bay could move, King deepened the kiss. His lips were moist and warm, and Bay’s nether regions tingled. He froze, mentally and physically. What the hell? He had never been kissed by a man. Not that he was against it; it had just never happened. Sex had never been a real part of his life. He’d always figured no one would want him, so why bother? Since his fame had blossomed, the couple of encounters he’d had were with women.

When the kiss ended and King stepped back, looking quite pleased with himself, Bay was speechless. He instinctively touched his lips and recalled the pressure that had been there.

King smiled again. “Don’t be embarrassed, I have that effect on guys all the time.”

Bay lowered his hand, shoved it in his pants pocket, and tried to strike a casual pose.

King folded one arm over his chest, brought his finger up to his chin, and eyed Bay curiously. “Bay, you are one hot man. Are you sure I have the right room? Most of my clients are older, out of shape, and relatively unattractive.”

“I’m sorry, King. I’m….” The words left his lips before he could stop them.

“Straight?” King finished the sentence. “A lot of my clients are”—King made air quotes—“straight.”

King took a step closer to Bay and was again near enough that Bay could smell his cologne. He gripped Bay’s asscheeks and squeezed, then tilted his head, leaned in, and gently bit Bay’s neck.

A chill ran down Bay’s spine as King nibbled on his skin, his lips warm and firm. He knew he should stop King, but the physical attention was wonderful.

Finally, Bay brought both hands up, laid them on King’s chest, and pushed gently. “Seriously.”

“Seriously?” King asked, taking a step back and looking confused.

Okay, granted, Bay had never identified as straight or gay. But with the events of the last few minutes and the way King’s touch affected him, he might at the very least be bisexual. He’d have to think about that possibility later. His past sexual encounters, few as they were, had been with women. They had been satisfying, but now a man was standing in front of him, kissing him and nibbling on his neck, and damn if it didn’t feel really good.

“Just my fucking luck,” King said, brushing his hands together like he was done with the charade. “I finally get a gorgeous client, and he doesn’t want me.”

“You think I’m gorgeous?” Bay asked, hearing the surprise in his own voice.

“Have you looked in the mirror?” King asked. “You are one handsome motherfucker.”

Bay knew he should let King be on his way, but he was intrigued. Suddenly he wanted to know more about him.

“Look,” Bay said before he could think better of it, “don’t go. I have you for two hours, right?”

“Then I want my money’s worth.”

The disappointment on King’s face was obvious. “For what, then?” he asked. “A card game?”

King flashed a gorgeous smile. “Only if it’s strip poker.”

“Deal,” Bay said, pretty certain he could bluff his way through a poker game with a gay escort.

Firstly, I’d like to thank Jen and Dog-Eared Daydreams for allowing me to stop in today and spend a little time with you. I truly appreciate your support and the support of your readers.

I don’t want to go into too much, but instead of telling you about the story, I’d like to talk about “coincidences.” This book has quite a few, almost like the universe or a high power was pulling the strings behind the scenes to get everything lined up and ready for Bay and King to meet. I’ll give you a few examples:

Some “guy” at another hotel, unaffiliated with King or Bay, contacts King and orders up a night of sex and fun. At King’s normal rates of course.

Said “guy” comes face to face with Bay at a high stakes poker game and gambles away his night with King as a last ditch attempt to win a game. And Bay is the lucky winner.

There are several more coincidences but I can’t give any more away without issuing a “spoiler alert”. However, the ones above are enough to set the story in motion.

Okay, so I’ll let you get to the excerpt. But before I do, I’d like to know if you believe in coincidences? The ones in this story are not huge and certainly not unbelievable, but it does beg the point that maybe just maybe we are not the only ones in control of our destiny. Has one or more or even a series of coincidences affected your life in some way? Tell me about it. And if you post, you’ll automatically be entered into a drawing for an e-book of From a Jack to a King.

Thanks for spending the time with me and I wish you and yours a wonderful and relaxed summer.

Scotty Cade left corporate America and twenty-five years of marketing and public relations in 2004 to buy an inn and restaurant on the island of Martha’s Vineyard with Kell, his husband of over twenty years.

He started writing stories as soon as he could read, but only in the last eight years for publication. When not at the inn, you can find him on the bow of his boat writing romance novels with his Shetland sheepdog, Mavis, at his side. Being from the South and a lover of commitment and fidelity, all of his characters find their way to long, healthy relationships, however long it takes them to get there. He believes that, in the end, the boy should always get the boy.

Scotty and Kell are avid boaters and spend the summers on Martha’s Vineyard and winters in Greenville, South Carolina.

Giveaway
Scotty Cade wants to know if YOU believe in coincidences. What's the most significant coincidence—or maybe a series of coincidences—you've ever had and how did affect your life? Simply leave a comment and share your experience with Scotty. Your comment will serve as your entry for a drawing of an e-book of Scotty's latest release, From a Jack to a King. Thanks for dropping by and for joining the giveaway!