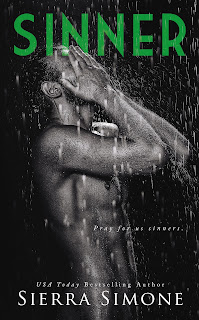 Confession time: I didn't get to reading the Priest series until I heard Sinner was coming out. I know, I know. My introduction to Sierra Simone's writing was through her New Camelot series, and it's one that I consider a part of my all-time favorites list, so you can imagine how high expectations are for anything that follows. It's not that I didn't want to. I've actually had the first two books--Priest and Midnight Mass--for more than two years, but with real life and a heck of a lot of advanced reader copies that I had on my plate, these two, sadly, fell to the wayside. But then I heard that Simone was coming out with a new book to add to the series, so I considered a sign of sorts. Not only have I finally read the former Father Tyler Bell's romance with Poppy Danforth, now Bell, but I too have met Tyler's brother, thirty-six-year-old Sean, who's admittedly every bit the sinner he's been called time and again.

Sean Bell makes no apologies for being the man that he is and living the kind of life that he has. He no longer believes in the God he was raised to have faith in, choosing instead to indulge in his favorite vices: sex, women, money, and the finer things in life. When he meets a mesmerizing woman at a function, he's immediately taken by her. She's clearly much younger than he is, but he's like a moth to her proverbial flame. When they see each other again, Sean is shocked to learn that it's Zenobia Iverson, his best friend's sister, fifteen years her junior, and the girl he used to call Zenny-bug. Oh, and did I forget to mention that she also happens to be a postulate with the order that runs a shelter and soup kitchen that's housed in the building the company Sean works for is set to acquire--a deal that Sean had closed. The building may not be a done deal, and the odds may be stacked against him getting the girl, but if there's one thing that Sean knows, it's that he always gets what he wants, no matter what the cost is.

If you're familiar with this particular author's books, then you know that she writes some of the steamiest stories out there. Yes, Sinner is every bit as dirty as its predecessors in the Priest series, but Sierra Simone has also made this into a thought-provoking tale about love, family, faith, and ultimately, forgiveness. There's more to Sean than meets the eye. Sure, he's a man who unabashedly indulges in the sins of the flesh, but he also had a lot of hidden pain residing within him. No one's ever gotten to him the way Zenny does, and while he believed he may have been corrupting her during all their, umm, encounters, Zenny was saving his soul and restarting his heart. That may sound cheesy, but don't forget that aside from all the sex, there is an honest-to-goodness love story that plays out between these two main characters as well as the intriguing side story regarding their respective families. While this book may be part of a series, it does very well as a standalone, although I'm always one to recommend reading a series in order just for a more well-rounded reading experience. Go ahead and indulge. Sinner receives five stars. ♥