Review: Promise Me We'll Be Okay by Nell Iris 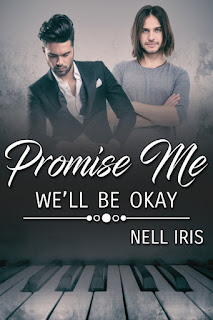 Promise Me We'll Be Okay is the latest novella from Nell Iris, and it's definitely become one of my favorites by the author. This second chance romance opens with teacher Jude Kinney answering several knocks on his front door only to find his former fiancé standing on his doorstep. Opening his door is one thing, but when lawyer Vincent Wallace III asks him for a chance to explain why everything ended the way it did two years ago is a whole different matter. Once upon a time, they were Juju and Vee, two men who were very much in love and engaged to be married. But Jude's being a high school music teacher with dreams of settling down with a white picket fence and a family wasn't ambitious enough for Vincent or his demanding father. Would listening to Vincent lead to more broken promises this time around, and will Jude's heart be able to recover if Vince manages to break it once again?

While it may not be everyone's cup of tea, I quite liked the manner in which Jude and Vince's story was told. There wasn't a whole lot of rehashing because it was pretty clear based on their interactions and the reaction of Jude's older brother Harrison upon seeing Vince again that the end of Jude and Vince's relationship left Jude wrecked for quite some time. Admittedly, I felt a wee bit more sympathetic towards Jude than Vince, but then that mostly due to the story being told from the former's point of view. That doesn't mean, though, that I didn't feel anything towards Vince. While his reason behind what he did to Jude was more of an excuse than anything else as far as I was concerned, it was obvious that he still loved Jude. For a quick but still sweet second chance love story, you may want to give Promise Me We'll Be Okay a look-see. It gets 4.5 stars, and I hope Benji gets his own happy ending too. ♥