Review: The Left Hand of Calvus by Ann Gallagher 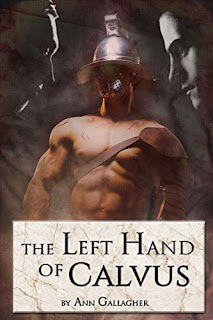 Originally released in November of 2012 as part of the multi-authored Warriors of Rome series by Riptide Publishing and under the author's name of L.A. Witt, The Left Hand of Calvus was re-released in 2016 as a self-published title and now with Ann Gallagher as the author, the name being one of L.A. Witt's known pseudonyms. Set in the latter half of the first century, this tale of intrigue with a hint of romance was certainly a read that had my full attention. We meet Saevius, a former gladiator bought by Laurea Calvus, but while Saevius assumed he would serve as his new master's bodyguard, he is instead sent on a clandestine and dangerous mission. Calvus wants to know who his wife's lover is, and in order to do that, Saevius will have to return to the arena and placed under the command of Drusus, a lanista whose reputation precedes him throughout Rome, Pompeii, and other areas. He needs to get answers for Calvus, but being around Drusus has Saevius asking more questioning. When the truth is discovered, Saevius may need to make a choice that may cost him his freedom, his heart...and his life.

I have yet to read an Ann Gallagher title that I didn't fall in love with, and the continues to hold true with The Left Hand of Calvus. Set during the historical period where men were made to fight against one another in a coliseum more often than not to the death, Saevius being a man had no freedom until his master chose to release him from his form of enslavement had me wanting to see where Gallagher would take her story. He isn't some brainless fool who uses only his brawn and strength. He's observant and far more knowledgeable than Calvus gave him credit for. His interactions with Drusus definitely had me sitting up and paying attention even more. These two had a strange connection from the start, and it was one that was strengthened over time and had them even more tethered to one another than they ever thought possible. This is one of those stories where not everything is as it seems, and that major twist knocked me for a loop because I so didn't coming at all! Again, Ann Gallagher has left me more than satisfied with one of her books. If you're familiar with ancient history, then what happens off the page to the city seems somewhat apt for Saevius and Drusus's story. I'm awarding The Left Hand of Calvus five out of five stars. ♥

Purchase The Left Hand of Calvus on Amazon.