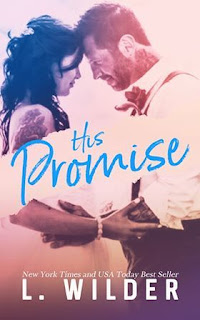 His Promise is the third and final book in the Happy Endings series from L. Wilder and features the eldest among the Michaels brothers, Colton. His success as a lawyer does little to erase the loss that he still feels even thought it's been four years since his wife and daughter were killed in an accident. People know to keep their distance from him, but there's one person who's managed to get through his walls: his legal assistant Langley. When Colton learns that about her custody woes with her ex-husband, he promises to do whatever necessary in order to help the woman who helped him keep things together while he still dealing with being a husband who lost the woman he loved and the father who lost the girl who owned his heart. Colton's solution was to get married and appear like a family unit with Langley's twins, but keeping up appearances is not as difficult as keeping their hearts in check...

This is a fake marriage with a twist, in that there isn't much in terms of actual full-blown lust or love from one or both of the participants in the charade. I liked Colton, even if the man was a wee bit cold in the beginning. His interactions with Bee and Ian--Langley's children--were my favorite thing about the entire book, mainly because it showed a side of that was very different from his more seemingly unfeeling persona that people saw. I liked Langley as well, although if I'm being honest here, I do think she mostly avoided confrontation with both her ex- and current husband. She gave Colton space instead of pushing him. Still, she was more than willing to do what she had to for her two kids, and I did admire her for standing up to Colton a couple of times. Their story does overlap a bit with that in book two, but this can pretty much be read as a standalone. His Promise gets four out of five stars. ♥

Read my reviews for the Happy Endings series:

Purchase His Promise on Amazon.