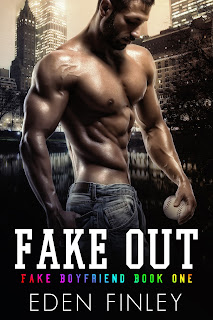 Why explore the rest of the world when the person who makes it go 'round is the man standing in front of me?

I went into my first Eden Finley read with what I'd like to believe were moderate expectations--readability and enjoyment. Since I've never read anything by the author before, I didn't want to base my expectations on reviews by other readers and bloggers on her past work. So, I took my open heart and mind and jumped, and boy, oh boy, was I rewarded with one hell of a story that had me hooked me from the first chapter till the very last sentence. Fake Out is the first in Finley's Fake Boyfriend series, and if you're familiar with my reviews, you'll know that I'm not a huge fan of the fake-relationship trope, mainly because it's become tiresome with the same ol' story line and very little in terms of creativity or an original spin to it. Well, the author did what I believed was impossible: she made me fall in love with this story and her cast of characters and struck a total home run.

When twenty-three-year-old Maddox Colin O'Shay bumps into his ex-girlfriend--and the only person he's ever been in a committed relationship with--and finds himself invited to her wedding, the first thing he knows he needs to do isn't to buy a gift or get a suit dry-cleaned. Nope, Maddox finds himself in desperate need for a fake boyfriend. Yes. BOYfriend. After all, the reason he gave his ex for their split before heading off to college was that he was gay...even though he happens to be straight. So, his best friend rescues him by offering up her older brother, soon-to-be law school graduate and incoming sports agent Damon Isaac King, who just happens to be single and gay. Damon thinks Maddox is a douche for lying about being gay, but during their time as fake boyfriends, he sees that maybe Maddox isn't such a bad guy after all. As long as he doesn't fall for him, of course, because if it's one thing that Damon's learned, it's that you don't fall in love with a straight guy, no matter how much of a connection you share. But what if Maddox isn't as straight as everyone thinks that he is?

I have no issues with this book whatsoever. Seriously. If I was forced to nitpick, I still wouldn't be able to find anything to gripe about (and trust me, I'll usually be able to find something). I loved that Maddox and Damon did not exactly get off on the right foot, and that both guys had their own struggles to deal with. There was also the whole thing about labeling when it came to one's sexuality, because while Damon seemed to have one that fit him and believed there was one that fit Maddox, Maddox wasn't all too sure if it truly defined who he was (and not because he wasn't accepting of certain truths that he realized about himself). I don't want to give too much away, but as far as I was concerned, this book had a lot about it that made it an absolute standout in a field of been-there, done-that stories. The main characters and their relationship developed over time, and this allowed for readers to not only get to know Maddox and Damon better, but to see how they worked with the dynamic that they had and how it would change as they embraced their feelings for one another. Oh, and did I forget to mention that this is a romantic comedy? Yup, one with small doses of angst, but enough to make this angst addict happy. Fake Out is THE real deal when it comes to M/M novels worth reading. Five-plus stars. ♥

Purchase Fake Out on Amazon.