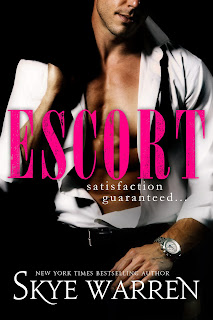 For a moment she look lost. “Is it always like this?”

In this moment there is only raw honest. “It's never like this.”

The thought terrifies me. This is supposed to be new for her; not for me. Never for me.

Gah! How am I supposed to write a review for this stirring read without spilling the beans story-wise?! I mean, come on! This isn't fair. There's SO much to tell you, but clearly I shouldn't because that would make me an absolute asshat of a blogger. So okay, I shall endeavor to keep this review as spoiler-free as possible. Let me try and give you an intro. Escort is a spin-off of sorts of Skye Warren's other series, namely, Stripped (which I have yet to read but already have on my to-be-read list!), Endgame, and Masterpiece. There isn't necessarily anything in those aforementioned series that directly ties in to this new standalone, but it does have characters from there that have cameo appearances here--Blue Eastman and Hannah Bowman from Heartbreak, Better When It Hurts, and Even Better (Stripped #1.5, #2, and #2.5, respectively), Gabriel Miller and Avery James (the Endgame books), and Damon Scott and his Penny (the Masterpiece duet). But again, you can totally read Escort without having read any of the previous stuff, although this does appear to set up either another potential spin-off standalone or possible series.

The main characters in Escort are Hugo Bellmont and Beatrix Cartwright. He's a high-class escort and she's a recluse pianist. When Bea books Hugo on the one day a week that he actually offers up his "services", it's for one reason and one reason only--she wants him to take her virginity. For the first time in his years as an escort, Hugo is at a loss. There's something about the beautiful heiress that calls to the depths of his soul and stirs his heart. He can offer her pleasure, yes, but is he really prepared to give her what she wants? See, those are just the basics of this story. There's a hell of a lot more that goes on between Hugo and Bea. Their personal histories are heartrending, and it also explains why Hugo is in the business he's in and why Bea remains within the gilded cage that is the penthouse suite of L'Etoile. There are a number of twists in the story, but the biggest one is one that I had running around in my head because I often have a variety of theories going on while reading, but suffice it to say that its resolution took me by surprise. Let me end this by saying: You need to read Escort ASAP! Five-plus stars. ♥