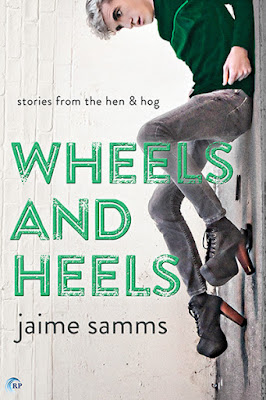 About Wheels and Heels
As a teenager, Ira Bedford fled a troubled home life and people who didn’t understand his penchant for feminine things. In the city, he fell in with Cedric, who found him work as an underage stripper. It took him years to escape Cedric’s influence and try to build a life of his own.

Now, he just wants to be left alone to create his art. But Cedric’s on-going harassment means Ira had to drop out of art school, is squatting in a friend’s apartment, and is still relying on his allure as a sexy, skirt-wearing exotic dancer to pay his bills.

Then he meets Jed. Part-time bartender and the apartment building’s superintendent, Jed is just the right mix of strong, kind, and protective to pull Ira out of hiding. He also welcomes Ira into his chosen family at the Hen and Hog Pub. But Ira yearns for more. Still, he doesn’t dare to hope that Jed will want him and his questionable past, his skirts and high heels, his hang-ups, and the profession he seems unable to escape. But Jed will do anything to prove him wrong.

Add Wheels and Heels on Goodreads.

About Jaime Samms
Jaime has been writing for various publishers since the fall of 2008, although she’s been writing for herself far longer. Her Stories about men falling in love are the stories that she loves to read, so it seemed to make sense if she was going to write, they would also be the stories she wrote.

These days, you can find plenty of free reading on her website. She also writes for Various Publishers.

Spare time, when it can be found rolled into a ball at the back of the dryer or cavorting with the dust bunnies in the corners, is spent crocheting, drawing, gardening (weather permitting, of course, since she is Canadian!), or watching movies. She has a day job, as well, which she loves, and two kids, but thankfully, also a wonderful husband who shoulders more than his fair share of household and child-care responsibilities.

She graduated some time ago from college with a fine arts diploma, and a major in textile arts, which basically qualifies her to draw pictures and create things with string and fabric. One always needs an official slip of paper to fall back on after all . . .

Giveaway
To celebrate the release of Wheels and Heels, one lucky winner will receive a $10 Riptide credit! Leave a comment with your contact info to enter the contest. Entries close at midnight, Eastern time, on March 17, 2018. Contest is NOT restricted to U.S. entries. Thanks for following the tour, and don’t forget to leave your contact info!