Book Spotlight: One Under by JL Merrow 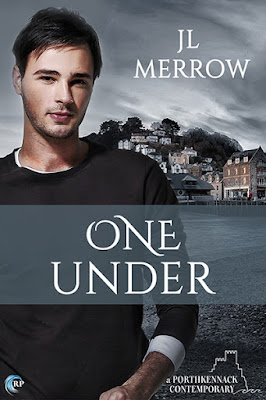 About One Under
London Underground worker Mal Thomas is staying in Porthkennack to recover from a traumatic experience. Getting more bad news from home is the last straw—until big, blond museum curator Jory Roscarrock steps up to offer some comfort.

As a doctor of English literature, Jory should be in a prestigious post at a top university. But a youthful indiscretion led him to abandon academia to come back to his hometown, Porthkennack, and the controlling family he’s never really felt a part of. He’s delighted to find a kindred spirit in Mal.

But Jory’s family hurt Mal’s best friend deeply, and while Jory is desperate to repair the damage, his own mistakes threaten to keep him and Mal apart. Meanwhile, Mal is torn between his feelings for Jory and his duty to his friend—and his fears that a failed relationship could be more than his shattered confidence can take. Jory must convince Mal it’s worth risking everything for their love.

Add One Under on Goodreads.

Find the Porthkennack series on Goodreads.

About the Porthkennack series
Welcome to Porthkennack, a charming Cornish seaside town with a long and sometimes sinister history. Legend says King Arthur's Black Knight built the fort on the headland here, and it’s a certainty that the town was founded on the proceeds of smuggling, piracy on the high seas, and the deliberate wrecking of cargo ships on the rocky shore. Nowadays it draws in the tourists with sunshine and surfing, but locals know that the ghosts of its Gothic past are never far below the surface.

Find the Porthkennack series on Goodreads.

A Note from JL Merrow
Hi, I’m JL Merrow, and I’m delighted to be here today as part of the blog tour to celebrate the release of One Under, the second of my contemporary MM romances in the multi-author Porthkennack series. One Under features a romance between two characters readers of my first Porthkennack book, Wake Up Call, will have already met: Mal Thomas and Jory Roscarrock—although you’d be forgiven for not recalling Jory’s blink-and-you’ll-miss-it appearance in Wake Up Call!

JL Merrow is that rare beast, an English person who refuses to drink tea. She read Natural Sciences at Cambridge, where she learned many things, chief amongst which was that she never wanted to see the inside of a lab ever again. Her one regret is that she never mastered the ability of punting one-handed whilst holding a glass of champagne.

She writes across genres, with a preference for contemporary gay romance and the paranormal, and is frequently accused of humour. Her novella Muscling Through is a 2013 EPIC ebook Award finalist. She is a member of the UK GLBTQ Fiction Meet organising team.

Giveaway
To celebrate this release, one lucky winner will receive their choice of a book from JL’s backlist! Leave a comment with your contact info to enter the contest. Entries close at midnight, Eastern time, on March 24, 2018. Contest is NOT restricted to U.S. entries.