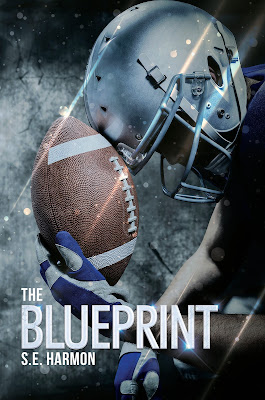 About The Blueprint
Kelly Cannon is generally satisfied with his life—he has a great job that he loves, friends, and a wonderful family. But his love life has reached a new level of pitiful. Why? Well, his heart decided to break all the rules. Don’t fall in love with a straight guy. And definitely don’t fall in love with your best friend.

NFL standout Britton “Blue” Montgomery has pressure coming at him from all sides. From his father, who’s only interested in Blue’s football career. From his coaches, who just want him to play without getting injured again. The fans. His agent. His mother, who popped back up on the radar after leaving his family years ago. Now his relationship with Kelly is on shaky ground, and that frightens Blue more than anything.

When Kelly admits he’s in love with Blue, bonds are tested, and Blue has to decide what’s really important. He doesn’t want to lose the number one person in his life, but the cost to keep Kelly close might be more than he’s willing to pay.

It’s a good thing his nickname is the Blueprint—it’s time to draft a new set of plans.

Read my five-starred review of The Blueprint.

Add The Blueprint on Goodreads.

An Excerpt from The Blueprint
By the time I got upstairs, Kelly had already changed into something else and was doing his hair in the bathroom mirror. I could smell faint traces of his beachy, tropical cologne, and I leaned against the doorjamb and took in his apparel—fitted black jeans and a crisp gray button-down that made his eyes look silver.

He looked good to me. Damn good. And those jeans framed his ass just right.

Clearly unaware I was having a meltdown right there in the lobes of my brain, he turned and sent me a smile. A dimple flashed in his cheek, and I wanted to stick my tongue in the indentation.

“You having a stroke or what?”

“I asked how my hair looked like six times.” He waved a hand in front of my face. “I know you look like a Neanderthal, but I always assumed looks were deceiving.”

I couldn’t even manage a word of our usual banter because it looked like he was getting ready to go out. Like out out. He wasn’t wearing his “just going to the neighborhood bar” gear. “Are you going to the club?”

“Of course not. What gave you that idea?” He raised an eyebrow and looked down at his outfit—all the way to his sexy bare feet. “I just thought I’d take my pants out on a walk.”

I glared. Smart mouth. Smart fucking sexy mouth. Christ. I wanted to fuck him so bad, wanted it more than anything I’d wanted in my life. He’d treated me to a trial, and I wanted the full version—without ads. Charge my credit card.

About S.E. Harmon
S.E. Harmon has had a lifelong love affair with writing. It’s been both wonderful and rocky (they’ve divorced several times), but they always manage to come back together. She’s a native Floridian with a Bachelor of Arts and a Masters in Fine Arts, and now splits her days between voraciously reading romance novels and squirreling away someplace to write them. Her current beta reader is a nosy American Eskimo who begrudgingly accepts payment in the form of dog biscuits.

A Q&A with S.E. Harmon
1. The Blueprint is a friends-to-lovers story, which is one of the more popular romance tropes. What do you think the appeal of this particular trope is, and with so many other books that use the same trope, what makes Kelly Cannon and Blue Montgomery's story stand out from the crowd?

The publishing landscape thrives on “high concept” stories, but tropes are tropes for a reason. True best friends are something special, something that doesn’t come around that often. It’s the person you can always depend on. The person you always pick up the phone for, no matter what time it is. What could be better than falling in love with the person you’re closest to in the world? As for how Kelly and Blue stand out from the crowd? I love how secure Kelly is in his geekiness and how much that appeals to Blue. And I love how self-assured and willing to go with the flow Blue is, and how he finally goes for what he wants. Most of all I love how they are together, and I hope you guys love them too.

2. Blue's a professional football player. How much of a football fan are you and what is it about the sport that made you decide to use it as part of your newest novel?

When I decided to write a sports romance, it was a no-brainer which sport I’d pick! I come from a family that loves football—back in the day, my dad actually went to Miami Dolphins training camp. My brother was a linebacker in high school and college, and my sister played football too. I can't tell you how many afternoons I spent up in the bleachers at my brother’s practices doing homework (not by choice...never by choice). My parents even used to host booster club dinners in our backyard. So even though basketball was my sport to play, football was always my sport to watch. I didn’t count on how much research it would take though.

3. If you could put together your own fantasy football team, who'd be part of it? (Feel free to go with actual football players, celebrities, authors, politicians, or a mish-mash of them!)

I’d have to go with Big Ben Roethlisberger as my QB, and Marshawn Lynch and Adrian Peterson as my RBs. I’d put Danny Amendola and Beckham Jr. as my wide receivers and Gronkowski as my tight end. Or Jason Witten. Or Jesse James…can you tell I like tight ends? (No pun intended, I swear.) Of course, one of the biggest parts of winning is having chemistry with your teammates to move the ball, so who knows what kind of Franken-team I just put together. 😊

4. What does the blueprint of your life over the last two years of this decade look like?

Challenging. Life never seems to want to follow any blueprints, so I just don’t draft them anymore. Every day is a new day, and it can lead me anywhere. That’s a lesson that Blue had to learn and embrace—your first draft is exactly that, and it can always change.

5. What words of wisdom would you give aspiring writers who look up to you as their inspiration?

Write and write often. Sometimes putting out a product you believe in is the only reward, so make sure that you love it before you ask others to. Oh, and start developing that thick skin now...you’re gonna need it. 😊

Thank you to S.E. Harmon for taking the time to answer my questions and to Hayley Leonovas of Dreamspinner Press for facilitating. ♥