Audiobook Review: Leaning Into the Fall by Lane Hayes, narrated by Nick J. Russo (Leaning Into #3) 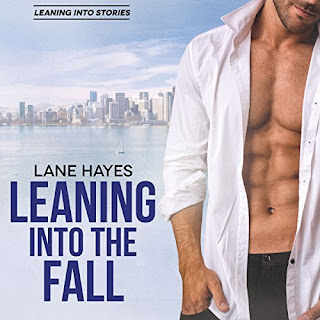 “You break my heart, Nick. You’re perfectly imperfect. I’ve never wanted anyone the way I want you. No one. Not even Mike. I loved him carefully, without any real passion. You…you take my breath away. You’re inside me. I feel everything you do. I don’t just hear your laughter or sense when you’re sad…I feel it. I want to make you happy. I want to fix you. Make you strong when you feel weak. Make you smile when you feel like crying. But I want someone who feels that way about me too. I’m not going through the motions of a one-sided affair again.”

I'd already read Leaning Into the Fall when it was released last year, but as is often the case when it comes to books that I consider favorites, I'm curious as to how they "sound" when they're released in audiobook. I loved Lane Hayes's first two audiobooks in the Leaning Into series, both of which were narrated by Seth Clayton, but for Nick Jorgensen and Wes Conrad's story, we've got listener favorite Nick J. Russo, and if I wasn't already a believer in the man's talent in other audiobooks that he's narrated, his performance in this latest addition to the audiobook would have done the trick. Any doubts I may have had about how this new partnership would turn out were totally, absolutely, and undeniably obliterated. I certainly wouldn't say "no" if Russo remains the narrator throughout the rest of the series because seriously? The guy brought something extraordinary to this audiobook.

I confess that I wasn't a fan of Nick's in Leaning Into Love, but the man seriously knocked me for a loop! The thirty-one-year-old genius had a story to tell, and it's one that he shares with Wes, who's quite a bit older than him. So, how do a tech wizard and a wine connoisseur lean into the fall? LIke figuring out a formula and creating a fine wine, these two had hits and misses, made wrong turns before finding their way out of the weeds. Could something that began as a lustful encounter between two men who may not have seemed to have a lot in common become the one thing that neither Nick nor Wes ever thought they'd have--a committed relationship with the person they love? Both Nick and Wes are complicated men with equally complicated histories, but their love story is the perfect reminder that at times, falling isn't all that scary when you know someone's there to catch you.

If I haven't said it before, let me make a point of doing so now: Lane Hayes knows the way to my heart. This series in general, and this book in particular cemented my fangirl status when it came to her writing. I'm now working my way through her previous other series, already finishing one and itching to get to the first two. She gave Nick his heart which he promptly offered to Wes, and in turn, they have mine. With as far as the other Nick in the equation, well, what can I say about Nick J. Russo's narration other than the man is gifted at what he does. He gave both Nick and Wes their voices while also remaining the perfect storyteller. This is the kind of audiobook that has the ideal mix of a fabulous story with equally fabulous narration, and the ones who get to reap the rewards are audiobook lovers like me. I'm seriously encouraging you to check out the Leaning Into the Fall audiobook ASAP. Five-plus stars. ♥

Purchase Leaning Into the Fall on Audible | iTunes.